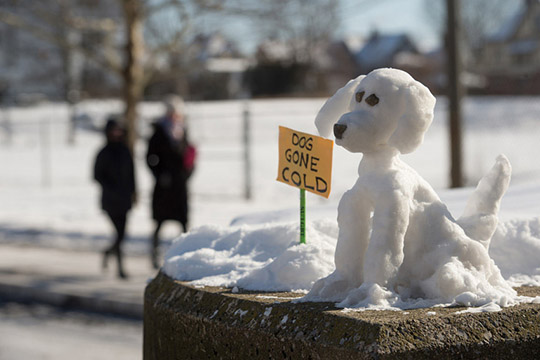 Parking attendant Jackie Snow expressed the feelings of everyone in the SU community with this recent sculpture and accompanying sign.

This winter’s “polar vortex” and bone-chilling temperatures have made the season a little harder to bear, but a drive through the Syracuse University campus’s South Gate will warm your heart and put a smile on your face.

It is there that Parking Services staff member Jackie Snow—a woman with the perfect name—turns the white stuff into something spectacular. Her most recent creation is a snow sculpture of a dog with a sign proclaiming it is “Dog Gone Cold.” 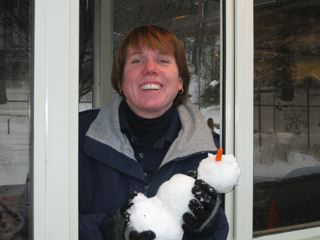 Snow works on one of her snow creations

Snow looks to current events for ideas for her snow creations—previous themes have included the snowstorm named Nemo, the Winter Olympics and “Fat Lincoln,” created when Abraham Lincoln’s birthday fell on Fat Tuesday.

A late March burst of snow last year at her home in Cicero, with remnants brought to work in a bag, provided Snow with just enough to create four snowpeople—“The Final Four,” which also paid homage to the SU men’s basketball team’s spot in the NCAA’s Final Four. Pictures of that creation went viral last spring.

Snow began creating the sculptures when she started working at SU in 2007. She is not an artist by trade—“my only medium is snow,” she says—and her snow sculpting experience comes from making snowmen with her sons, Nick and Ryan, when they were young boys.

She made her first SU snowman outside the South Gate after the first snowfall that year. “Everyone went crazy,” she says. Her snow creations soon became something that people were looking for. “People will come through the gate and say, ‘Hey, where is the snowman? It is something that has just evolved, and people love it.” 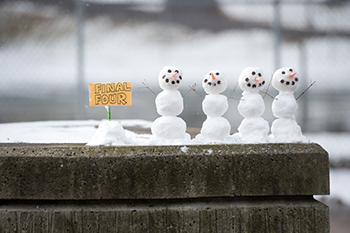 This quartet rooted on the Syracuse men’s basketball team in the 2013 NCAA Final Four.

The snowmen have proved so popular that Snow has even gotten some assistance in creating them. “I have had people bring me snow in hand-held coolers, and bring clothes,” she says. At the gate, she has a drawer with rocks, sticks and felt to be used in her creations. There have only been a couple of times that the creations have not simply melted away but instead met an unnatural end. “I was finding body parts all the way up to the stop sign,” she says.

Snow describes herself as a “Jackie of all trades.” She has done a little bit of everything—service in the Navy, selling cars—before coming to SU. The boys that she and her husband, Mike, have are grown—Nick is a senior at St. John Fisher College in Rochester and Ryan, a senior at Cicero-North Syracuse High School, will attend SU in the fall.

But she still loves to play in the snow.