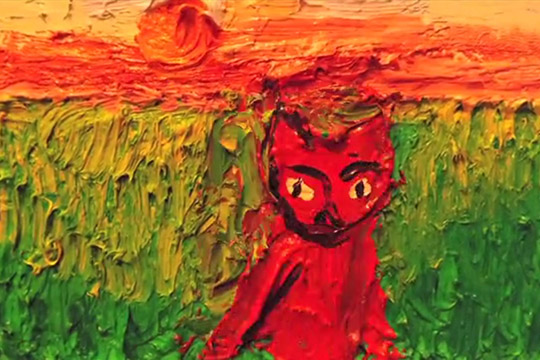 Kugimiya’s work is unique in its use of traditional painting techniques to create quirky stop-motion animations. Each of the 30 frames per second that make up the moving image is a unique painting, lending the videos a visceral quality in which the traces of time are materially present.

The stars of this suite of short pieces are all anthropomorphic cats deeply engaged in some everyday task–brushing their teeth, placing their order at the counter of a fast-food stand, savoring a donut in the sunset—the cats are at once stand-ins for everyone and eccentrically specific individuals. The result is a whimsical and light-handed meditation on how the transcendent reveals itself within the mundane.

Kugimiya will give an artist talk in the Everson’s Hosmer Auditorium on Tuesday, Feb. 4, at 6:30 p.m. A reception will follow on the plaza.

Kugimiya (born 1981, Tokyo) has been working from her base in Brooklyn since graduating from Yale University in 2007. Kugimiya has exhibited solo within Europe, Japan, Mexico and the United States, and had a well-received solo exhibition at the Everson Museum of Art in November 2010.