Richmond, April, 1865. The Civil War has ended and Caleb DeLeon, a badly wounded Confederate soldier, stumbles into the ruin of what was once his home. His family has fled the city’s destruction, leaving two former slaves, Simon and John, to wait and watch. Together they care for the wounded Caleb, and having adopted the religion of their former owners, celebrate Passover. A mesmerizing drama ensues, where secrets are revealed and the plot twists and turns. Since opening off-Broadway to critical acclaim and winning the Outer Critics Circle Award for Best Play, “The Whipping Man” has become one of the most produced plays in the country. 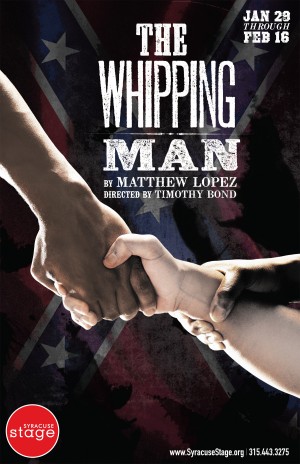 “The Whipping Man” performs Jan. 29-Feb. 16 in the Archbold Theatre at the Syracuse Stage/Drama Complex. It is recommended for ages 13 and up due to mature subject matter. Tickets can be purchased online at http://www.SyracuseStage.org, by phone at 315-443-3275, or in person at the Syracuse Stage Box Office at 820 E. Genesee St. Discounts are available for groups of 10 or more at 315-443-9844.

Pre-and post-show events during the run of “The Whipping Man” include the Opening Night Party on Jan. 31 with live music, Wednesday @ 1 Lecture on Feb. 5 (“Jews and the Civil War” with Samuel D. Gruber, Rothman Family Lecturer in Judaic Studies at Syracuse University), Happy Hour on Feb. 6 (with half price drinks and complimentary snacks), an Actor Talkback following the 7 p.m. show on Feb. 9, and Prologues (moderated discussions with actors) on Feb. 2, 8 and 13.) Visit Syracuse Stage Events for more information.

Additionally, in the Coyne Lobby, patrons can enjoy an exhibition prepared by the Onondaga Historical Association titled “Syracuse Reflections on Slavery and The Civil War,” which will depict stories about the history of slavery in Onondaga County prior to 1827. The display will also cover Syracuse’s Jewish community during the Civil War, including Jewish soldiers of the Fourth Onondaga County Regiment, the 149th New York Volunteers, and the significance of Syracuse’s salt industry to the Union cause.

“What better time to delve into a play that examines the moment of the end of the Civil War and slavery than on the 50th anniversary of the passing of the Civil Rights Act of 1964 and in the midst of the sesquicentennial (150th anniversary) of the Civil War,” says director Timothy Bond. “The deeply entwined histories and relationships of the play’s deftly drawn characters live in its complex explorations of shared faith, the meaning of the words ‘family’ and ‘freedom,’ and all of it illuminated with honesty, precision and fine craft by Mr. Lopez.” (Program Letter)

Playwright Matthew Lopez struck upon the premise for “The Whipping Man” when he learned that Passover in 1865 began the day after President Abraham Lincoln signed the Emancipation Proclamation. “It was this eureka moment,” says Lopez. “As these slaves were being freed in the American South, there was this ancient observance of the Exodus story.” (The New York Times)

“It was nice to write about the end of slavery, rather than the hope for an end to slavery,” Lopez says. “I love the use of Passover as one giant metaphor.  … Its purpose is to allow the past to converse with the present so that the lessons and sacrifices of previous generations are not lost. … I am the very fortunate recipient of exquisite historical timing.” (Program Notes)

“The Whipping Man” is one of the most popular new plays in America, produced at more than 30 theaters nationwide. In 2010, it premiered in New York at the Manhattan Theatre Club, where it sold out and extended four times. The New York Times called it “haunting, striking and powerful.” “A perfect balance between realism and drama, culminating in a Seder loaded with ironies and revelations,” said The New Yorker. Entertainment Weekly said, “Smart dialogue ranges from rhythmic to biting to funny.” Subsequently, Lopez was awarded the John Gassner New Play Award from the New York Outer Critics Circle.

Following the success of “The Whipping Man,” Lopez became one of the most widely produced new playwrights in America. He holds new play commissions from Roundabout Theatre Company, Manhattan Theatre Club, Hartford Stage and South Coast Rep. He was a season two staff writer on Aaron Sorkin’s HBO series “The Newsroom” and is currently developing a screen adaptation of Javier Marias’ “Your Face Tomorrow” trilogy for Brad Pitt’s Plan B Entertainment.