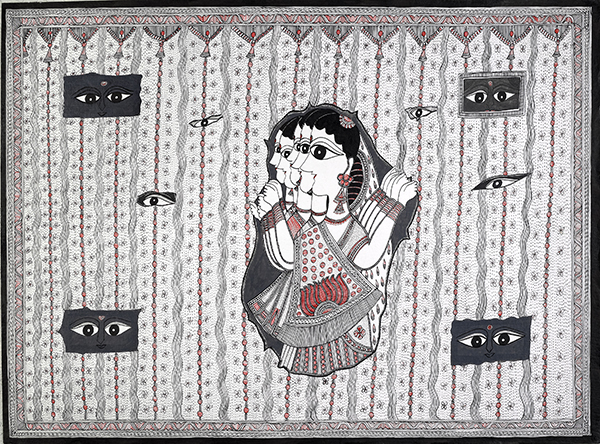 The commodification of South Asia folk art, including Mithila paintings by women from Northern India and parts of Nepal, is the focus of an upcoming Ray Smith Symposium.

The symposium “Transformations in South Asian Folk Arts, Aesthetics, and Commodities” will run Feb. 27 to March 1 at various locations on the SU campus. More than a dozen artists and scholars from Canada, India, the United Kingdom and the United States will participate in keynote lectures, panel discussions, workshops and exhibitions. All events are free and open to the public. For more information, call 315-443-2533 or visit mithila.syr.edu.

“Transformations” is presented by the South Asia Center in the Maxwell School’s Moynihan Institute for Global Affairs, in conjunction with The College of Arts and Sciences and the Cornell-Syracuse South Asia Consortium.

“The goal of the symposium is to unpack questions about identity, the pressures of global consumerism and transnationalism, and the troublesome divide between arts and crafts in South Asia,” says Susan S. Wadley, the Ford-Maxwell Professor of South Asian Studies in the Maxwell School.

The result is a rich, varied program that incorporates projects from all over campus, including three SUArt Galleries exhibitions, running concurrently from Jan. 30 to March 16: “Mithila Painting: The Evolution of an Art Form,” organized by the Ethnic Arts Foundation (EAF); “Modern Visions, Sacred Tales,” culled from the H. Daniel Smith Poster Archive in SU Libraries; and “Featured Artwork: Selections from The Ruth Reeves Collection of Indian Folk Art.”

Ray says the symposium is timely because of the growing commodification of South Asian folk art. She attributes this shift to intermediaries, which influence the buying habits of art retailers and collectors, and to technology, which is changing the way art is made and reproduced.

“All of the traditions we will discuss are affected by commodification in some fashion,” Ray says. “The boundaries between ‘craft,’ ‘folk art’ and ‘fine art’ have become blurry, as Indian art has secured high visibility in the international marketplace, beyond its traditional household value.”

In addition to the three organizers, the remaining list of speakers is a veritable who’s who of art scholars, teachers and practitioners:

• Coralynn Davis, associate professor of women’s and gender studies and of anthropology at Bucknell University;

• Nora Fisher, curator emerita of textiles and costumes at the Museum of International Folk Art in Santa Fe, N.M.;

• Pika Ghosh, associate professor of art at the University of North Carolina at Chapel Hill;

• Kajri Jain, associate professor of Indian visual culture and contemporary art at the University of Toronto in Mississiauga (Ontario);

• Frank Korom, professor of religion and anthropology at Boston University;

• Darielle Mason, the Stella Kramrisch Curator of Indian and Himalayan Art at the Philadelphia Museum of Art and adjunct associate professor of the history of art at the University of Pennsylvania;

• David Szanton, president of EAF and former executive director of international and area studies at the University of California, Berkeley; and

• Peter Zirnis, curator and photographer of Mithila art and an EAF board member. 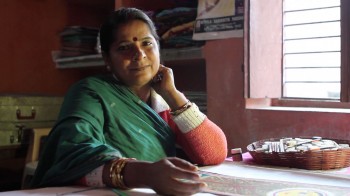 Organizers are particularly excited about Jha, who will conduct several painting demonstrations and workshops at SU and in area schools, as well as teacher training sessions at Onondaga-Cortland-Madison BOCES.

A feminist from rural India, she uses painting to raise awareness of social justice issues for Indian women.

“Rani Jha was born into a conservative Brahmin family, where girls receive little or no education,” Goenka says. “She railed against tradition and went to school, eventually earning a Ph.D. in Maithili folk traditions. Today, she is one of the leading scholar-artists of her kind.”

Long the domain of upper-caste women, Mithila artwork is known for its vibrant color and geometrical shapes. Such paintings originally consisted of murals, which adorned the inner walls of homes and courtyards and depicted mostly gods and goddesses, deity symbols and daily life.

When Mithila painting was introduced to the outside world in the 1930s, it underwent a rapid transformation in terms of commodification, style and content.

“Today, women of all ages use Mithila painting to comment on issues ranging from arranged marriages, to dowry deaths, to female infanticide. But it’s also used to celebrate female goals and accomplishments,” says Wadley, citing a famous painting that envisions Indian and Pakistani women playing cricket together, something that would have been unheard of 40 years ago.

“Transformations” is underwritten by a Title VI grant from the U.S. Department of Education’s National Resource Center.

“Transformations” is part of the Ray Smith Symposium Series, established in 1989, as the result of a bequest from the estate of SU alumnus Ray W. Smith ’21 to support humanities programming in The College of Arts and Sciences.