A Change in Weather 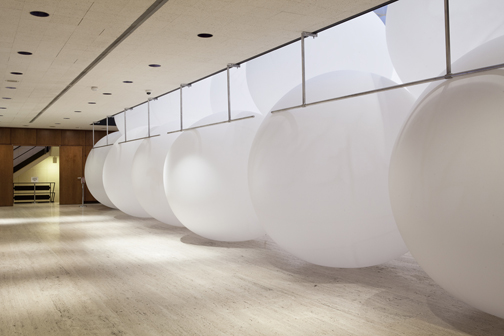 In the exhibition “Acadia,” 20,000 cubic feet of air was compressed at Acadia National Park in Maine and moved to inflate more than 60, 10’ meteorological balloons. As the balloons deflate or burst the atmosphere of the museum is changed. Photo by Joe Lingeman

Artist Sam Van Aken was curious about the effects of weather on body and mind.

So he is transforming the atmosphere inside the Munson-Williams-Proctor Arts Institute’s (MWPAI) Museum of Art in Utica—at least for a little while.

The associate professor’s exhibition, “A Hole in the Sky,” explores altering matter and mood through his work that includes the installation of giant weather balloons filled with crisp Maine sea air inside the museum’s Edward W. Root Sculpture Court. The exhibition, which was commissioned by the art museum specifically for the space, began in November and runs through Feb. 23.

“It’s all air from another place that’s been brought into the middle of the museum,” says Van Aken, who teaches in the sculpture program in the College of Visual and Performing Arts. “Then what’s happening is, through the three months of the exhibition the balloons pop and deflate, and the goal is to ‘change the weather or change the atmosphere’ of the space.”

The 60, 10-foot balloons are an impressive site.

“Most of it is a visual phenomenon seeing these enormous forms in this state. It’s more of a gesture that the atmosphere changes,” says Van Aken, who teaches intermediate and advance sculpture classes and co-teaches the graduate course “Practicing in Public.”

The MWPAI project is composed of two parts: “Acadia,” the sculpture of 10-foot weather balloons, and “Peanut Butter and Dead Fish,” an accompanying exhibition of visual pieces that change the atmosphere of the individual, their psychological state, by creating auras or a change in psychological state. 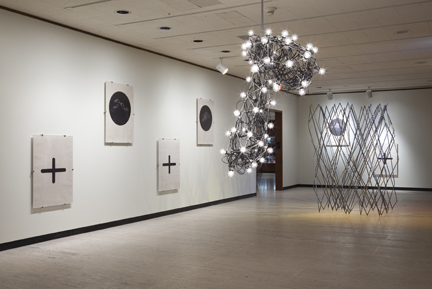 Suspended from the ceiling is a crescent-shaped aluminum armature that holds 60 25-watt lights. These lights flicker at random rates and produce the Purkinje effect. When one stand in front of it with eyes closed the photic driving of the light causes optical hallucinations. Photo by Joe Lingeman

The title piece is a suspended framework that holds 60, 25-watt lights, which flicker at random. When standing in front of the installation, with eyes closed, the flashing light causes optical hallucinations.

Van Aken also wanted the exhibition to change the atmosphere at times above the MWPAI. On opening night, a skywriter flew over the institute and created a “False Cloud.”

In December, a Twin-Prop plane flew through an altocumulus cloud to cause the super-cooled water droplets to fall as rain. The occurrence created a Hole in the Sky, which produces the distinctive rays of twilight breaking through the gray fall sky.

Van Aken’s fascination with the state of weather grew as part of another project, “Tree of 40 Fruit.” For this work he grows grafted fruit trees, each tree having the capacity to grow more than 40 different types of stone fruits, including peaches, plums, apricots, nectarines, cherries and almonds.

With an opportunity to exhibit the work at the Armory Show in New York City, Van Aken needed the trees to blossom in March. By bringing them inside and providing enough heat and light, he forced the blossoms.

He then began thinking about the impact of the atmosphere change on the trees and the challenge of the harsh Syracuse winters.

“I kind of imagined myself as the tree and then taking it even further,” Van Aken says. The idea of changing the weather has been central to every culture, from tribal rituals to weather modification such as cloud seeding. And a large concern is also about climate change.

“I was using the weather as a metaphor for something almost like a song, where weather becomes this metaphor for mood and emotion, but weather is also a condition, it is the state of things,” Van Aken says.

For the Utica exhibition, Van Aken rented an industrial air condenser and traveled to Acadia National Park in Maine, where he taught at the University of Maine. “I wanted to get the smell of the air, and by condensing it, I was able to draw all the moisture and impurities out of it to capture the ocean, pine smell,” he says.

At the museum, he used a compressor to infuse the air into the balloons, which are a type of meteorological balloon that is used, for example, in Buffalo where they are released to test the upper air atmosphere. 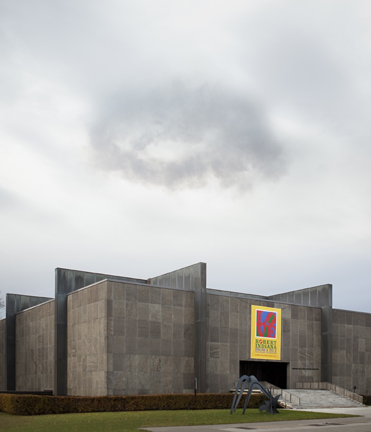 A skywriter was used to fly over the Munson-Williams-Proctor Art Institute and create a false cloud. Photo by Joe Lingeman

“There was something magical and also playful as the installation was taking place, with enormous balloons bouncing into their places and then glowing at different times of the day through the late-autumn and winter light,” Murray says.

Visitors are struck by the transformation of the space—and even smaller guests are captivated. “Little kids love this installation,” she says.

The changeable nature of the exhibition has made it especially dynamic. “The weather balloons are deflating as the weeks progress, so there is something poignant about it too,” Murray says.

The exhibition has been all that Van Aken imagined—very much comparable to the renderings he did to represent the project to Murray and the art museum’s director. “It looked pretty outrageous, and then actually to pull off the installation, they were surprised—but in a good way,” he says.