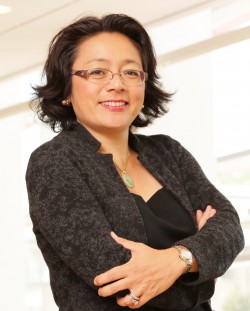 Irene Chang Britt, president of Pepperidge Farm and senior vice president for global baking and snacking with the Campbell Soup Co., will visit the Newhouse School on Tuesday, Jan. 28, as a guest of the Eric Mower Advertising Forum. She will give a talk, “From Anthropology to Advertising,” at 6:30 p.m. in the Joyce Hergenhan Auditorium in Newhouse 3. Follow on Twitter at #MowerForum.

Britt joined Campbell in 2005 as vice president and general manager of sauces and beverages. She was named president of North America foodservice in 2008, and senior vice president and chief strategy officer in 2010. She previously spent eight years at Kraft Foods and 12 years at Kimberly-Clark.

Britt has served as a director of the board of Sunoco Inc. and also serves on the Catalyst Board of Advisors and the Enactus U.S. Executive Advisory Board.

She has been honored with several awards, including being named a 2011 “Woman of Distinction” by the Philadelphia Business Journal and a laureate in the New Jersey Business Hall of Fame. In 2008, she was recognized by NJBiz as one of the “Best 50 Women in Business”; by Pink magazine as a “Top 15 Innovator”; and by Progressive Grocer as a “Top Woman in Grocery.” In 2002, she received the Corporate Achievement Award from the Organization of Chinese Americans.

Her talk is free and open to the public. For more information, contact Karen Greenfield at 315-443-2304 or kegreenf@syr.edu.