The Newhouse School has received a $500,000 gift from the William Randolph Hearst Foundation for the school’s new production studios. The gift will support the $18 million renovation of the Newhouse 2 building, currently in progress. 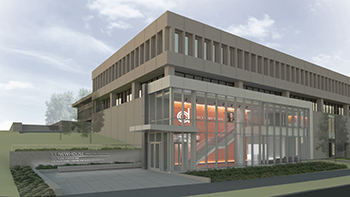 A $500,000 gift from the William Randolph Hearst Foundation will support the $18 million renovation of the Newhouse 2 building.

“At the Newhouse School, we are constantly striving to prepare our students for careers in a changing industry, and our studios project is a major example of that,” says Newhouse Dean Lorraine Branham. “We couldn’t do it without support from partners like Hearst.”

The renovation will update the school’s studio facility, bringing it fully into the digital age and providing students with cutting-edge equipment and work spaces that more accurately reflect the professional settings where they will pursue their careers. This is the first major renovation of the building since it opened in 1974.

Slated for completion in fall 2014, the updated facility will be named Dick Clark Studios in honor of legendary entertainer and Syracuse University alumnus Dick Clark ’51. Clark’s widow, Kari, announced a $5 million lead gift from the Kari and Dick Clark Foundation to the Newhouse School at the school’s annual Mirror Awards ceremony last June.

The Hearst Foundations are national philanthropic resources for organizations working in the fields of culture, education, health and social services.

Over the years, the Hearst Foundations have been a consistent supporter of the Newhouse School. In 1997, they established the Hearst Visiting Professionals in Journalism, an endowed fund used each year to support professional journalists and leaders in communications who provide educational programming through lectures and dialogue with Newhouse students, faculty and staff.