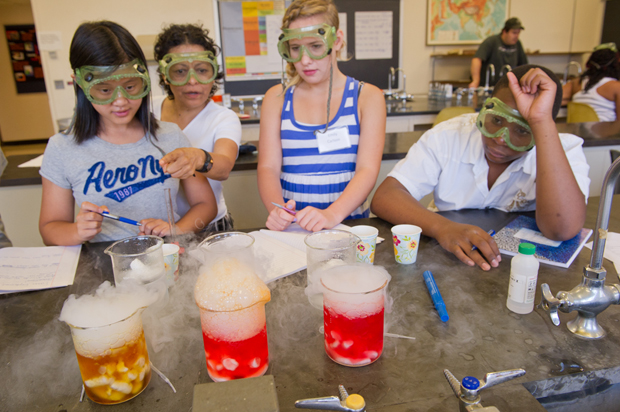 The national education landscape is shifting for teachers—and new teachers being prepared in the School of Education—as the Common Core standards are put in place. In this photo, Nottingham High School students perform experiments at a School of Education science summer camp.

School of Education Professor Kelly Chandler-Olcott encounters the challenges of the Common Core State Standards Initiative as both a teacher and a parent. Last year, she was told by her daughter’s fourth-grade math teacher that the curriculum would include what was once fifth-grade material and a bit of sixth-grade coursework.

“He said ‘we’re going to teach them as best as we can, but this is a new curriculum and we don’t have that deep-felt sense of what the kids will encounter,’” says Chandler-Olcott, chair of the School of Education’s Reading and Language Arts Center. 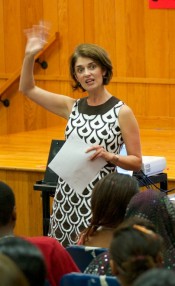 Her daughter did well, but it still remains a time of transition for both students and teachers—and for new teachers who Chandler-Olcott and her School of Education colleagues must prepare for this shift in the national education landscape.

The national Common Core initiative in K-12 education provides what its developers say are clear goals for what students are expected to learn in English language arts and mathematics, reflecting the knowledge and skills needed for students to succeed in college and careers.

The standards demand more out of students to think critically—instead of relying on memorization—and to go deeper into material, instead of covering broad areas of knowledge. Curricula are being adjusted to reflect the new standards, including certain coursework being taught in earlier grades.

“For public school teachers, in some ways it’s more of an adjustment than our students at the School of Education,” Chandler-Olcott says. “Our students may have a vague memory of the material being taught in high school, but they don’t have that sense of what grade that was in.”

Student teachers are being immersed in Common Core as learners without having to adapt as current teachers, who have to change their curriculum.

“They are now learning this for the first time as a teacher,” says School of Education Interim-Dean Designate Joanna O. Masingila. “The biggest adjustment is helping our students realize that when they go to work, the situation will still be in a state of flux.”

The development of the Common Core was led by the National Governors Association and the Council of Chief State School Officers with input from teachers, parents, school administrators and education experts. Forty-five states and the District of Columbia have adopted the standards.

The standards set certain competencies for students at each grade, such as adding and subtracting within 20 in first grade math or, by the end of ninth grade, being able to evaluate the argument and specific claims in a text, assessing the reasoning and relevancy of the evidence.

As states have rolled out the new standards, the Common Core has not been without controversy. 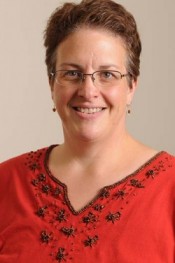 Masingila believes one of the biggest concerns has been about how the initiative was rolled out, whether or not it should have been more of a gradual implementation instead of putting it into place in all grades at once.

“For example, teachers feel that third-grade students—since they haven’t had Common Core for first and second grade—would not be prepared for the new expectations under the Common Core. So would you start in kindergarten and move it up every year? But then it would take 13 years to implement,” Masingila says.

Another area of concern was that it came at a time for high accountability for teachers with the New York State Annual Professional Performance Reviews.

“Common Core could be any curriculum, but it also happens to be adopted at the same time the state is ratcheting up teacher accountability,” Masingila says.

The principles of Common Core have been embraced in their intent by teacher organizations and in the School of Education, which emphasized critical thinking and reasoning even before the Common Core.

“The National Council of Teachers of Mathematics (NCTM) supports Common Core because the idea of having fewer topics for each grade and going much deeper is more in line with what higher-performing countries are doing as far as curriculum,” Masingila says.

The NCTM has recommended similar methods, called process standards, which came out in 2000 and engage students in problem solving, using reasoning, constructing viable arguments and critiquing their reasoning.

“We encourage our students to work with their mentor teacher to become familiar with the material and see how they can help students understand the content and really have them think critically, communicate mathematically and engage in problem-solving,” Masingila says. They also have to understand the connections between each area of math to make those connections for their students.

In English language arts, Chandler-Olcott approves how the Common Core makes literacy a shared responsibility across the disciplines—whether in English, math, science or any other area.

“The School of Education has been at the forefront of this since the late ’60s and ’70s and we’ve had the course Literacy Across the Curriculum in place since 2001,” Chandler-Olcott says. “It was a state requirement that went into effect in 2004 that all teachers would have six credits of language and literacy regardless of their secondary certification area.”

More recently, Chandler-Olcott has tweaked the coursework to align it more with the Common Core. For example, instead of just having students share quotes from the readings to articulate central themes, students must now show why they picked them and how they relate to the central idea, and predict what the class is going to be about.

“It’s not a dramatically different task, but it goes in a different place and it gives them practice with Common Core ways of thinking about text that they can then translate in their own classrooms,” Chandler-Olcott says.

Chandler-Olcott appreciates how the Common Core creates national expectations, making learning consistent across most states. “We’re a national institution and our students come from all over the United States, so we can’t just prepare them for New York State. We have to prepare them with a broader vision of what teaching and learning is,” she says.

As students learn to implement the Common Core, professionals are also reviewing the standards and how each state’s curriculum materials are living up to those standards. Chandler-Olcott has written papers, along with other School of Education faculty, that have looked at the states’ curricula and point to certain areas, such as digital literacy, that need to be enhanced and made suggestions to fill in the gaps.

“We’re saying we’re on board and that we like this larger agenda, but what about technology, what about the kids with disabilities and English language learners whose needs are under-elaborated in both the standards and accompanying curriculum,” Chandler-Olcott says.

As these issues are worked out, probably over the span of many years, School of Education faculty for now have to help students process the changing times and at times help them deal with any anxiety they see in their mentor teachers in the field.

“I have been having them write poems—that’s how we communicate in English studies,” Chandler-Olcott says.

For Masingila’s classes, it’s obvious. “We do math problems,” she says.

Beyond the challenges and new expectations with Common Core, faculty are mostly educating new teachers as they always have.

“We’re preparing students to be thinking teachers, lifelong learners, who are growing and professionally engaged and talking with colleagues—thinking about what it means for students to learn a new idea,” Masingila says.

In the 2008 Summer Olympics in Beijing, Team USA’s Shalane Flanagan won a bronze medal in the 10,000-meter race that didn’t end until late on a Friday night. Flanagan had to be drug-tested after the race and needed to run…

The next big step for the newly formed Syracuse-Onondaga Food Systems Alliance (SOFSA) started, naturally, with Evan Weissman’s kindness and vision for food justice in the Syracuse community. Nel Gaudé, who was completing a master’s in food studies from the…

The Tokyo Olympics will have a different vibe from other games. No fans in the stands will make for quiet venues. And what impact might that have on drawing young viewers into watching the games and participating in sports in…