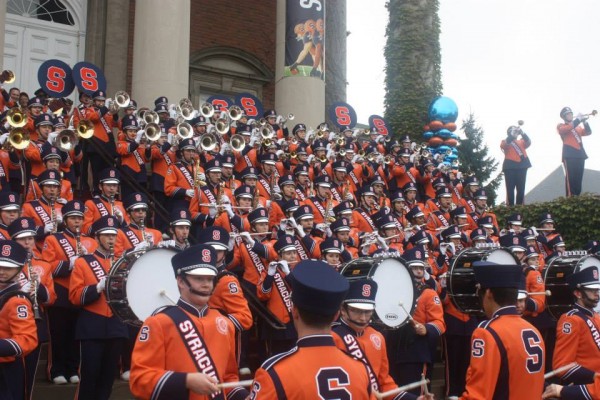 The SU Marching Band will perform on the field before Super Bowl XLVIII.

The bands will perform at approximately 6 p.m. Kickoff is slated for 6:30 p.m.

The National Football League invited the SUMB to perform at the Super Bowl.

“Everyone in the SUMB is incredibly honored to be selected to perform at one of the biggest sporting and media events in the world,” says Justin Mertz, director of the band. “As New York’s college band, we are a perfect fit for this year’s historic Super Bowl at MetLife Stadium. The SUMB is a premier college band in the Northeast, and we will make everyone at SU proud as we take the field on Super Bowl Sunday.”

The 200-member SUMB performs for all home football games in SU’s Carrier Dome and is the flagship college band in the state of New York. It also serves as an SU ambassador, representing the University at major events both on and off campus. It is housed in the Rose, Jules R. and Stanford S. Setnor School of Music in the College of Visual and Performing Arts.

“The SUMB is composed of students from every school and college at the University,” says Patrick Jones, director of the Setnor School of Music. “When they hit the field, they represent all of SU to the world. We are thrilled that our students have the opportunity to be a part of one of America’s great events.”