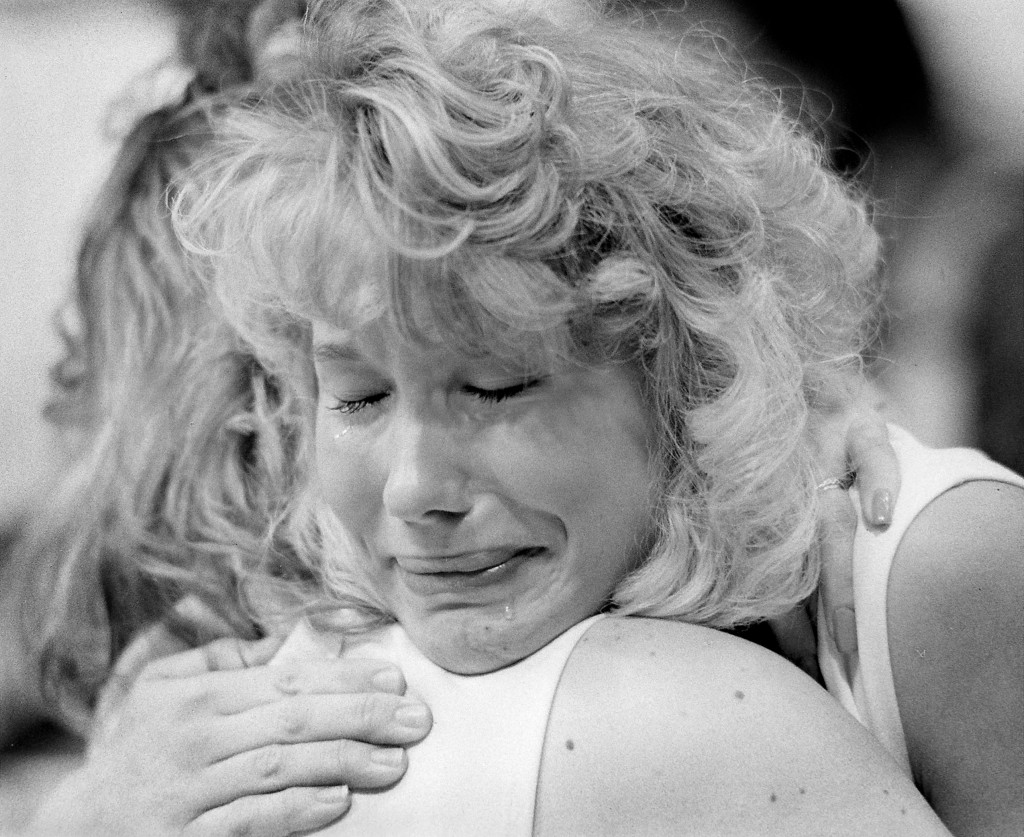 Catherine Crossland hugs a friend at an SU basketball game on Dec. 21, 1988, hours after learning about the explosion of Pan Am 103 and the deaths of SU students aboard.

When Catherine Crossland returned to campus in January 1989 for the second half of her sophomore year at Syracuse University, a friend gave her a newspaper he bought while studying abroad the previous semester.

The paper was from South Africa. It had Crossland’s photo on the front page.

It was the first time Crossland, whose married name is Hauschild, realized how far and wide her photograph had been seen.

The black-and-white image of a crying Hauschild hugging a friend at an SU basketball game is one of the most iconic images to come from the Pan Am Flight 103 disaster. The photo was taken in the Carrier Dome on Dec. 21, 1988, just hours after the terrorist attack that killed 270 people, including 35 SU students.

The image was likely used in hundreds of newspapers and magazines around the globe. For 25 years, Hauschild has been the face of a grieving campus, perhaps a grieving world.

Hauschild was an SU cheerleader at the time, on the sidelines as the Orange played Western Michigan. Pan Am Flight 103 had exploded in mid-air over Lockerbie, Scotland, at about 7 p.m. or about 2 p.m. Syracuse time. Tipoff was at 8 p.m. There was no Internet; there was no Twitter. News about the victims was trickling in and word was spreading that there were SU students on board.

Hauschild spent the afternoon glued to the television, reading a ticker of victims’ names. She had friends who were coming home from studying abroad in Europe and, like many others on campus, she was very upset. But the opposing team was already in town and SU went on with the game—a decision then-Chancellor Melvin A. Eggers later said he regretted.

The Dome observed a moment of silence and the crowd wept. Among them was Hauschild, a 19-year-old Newhouse sophomore from Ohio, trying to be a cheerleader.

Photographer David Grunfeld, a former student in SU’s College of Visual and Performing Arts who was stringing for United Press International that night, took her photo. Hauschild is tightly hugging a fellow cheerleader. Her chin is pressed into the woman’s shoulder. Her eyes are closed. Her mouth is pursed. And large tears are streaming down her face.

Grunfeld says he was standing just a few feet away from Hauschild when he took her picture. His assignment that night was to shoot the game and capture the emotion of the Dome after the Pan Am 103 news, he says. He was taking photos of the crowd in the stands but then saw Hauschild right in front of him.

“I see these tears streaming down her face,” he says. “I got two frames off in this very quiet moment. It didn’t last very long. I knew we had to get that out on the wire immediately.” 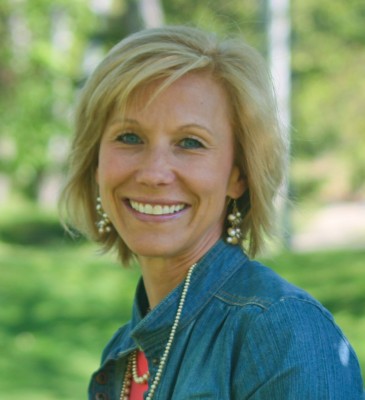 Grunfeld says he remembers that Newhouse professor Lawrence Mason, who was also taking pictures that night, took his film up to the Dome’s darkroom for him since Grunfeld needed to stay near the court.

“In those days you didn’t really know what you had until you developed the film,” says Grunfeld, a former Post-Standard photographer who has worked at the New Orleans Times-Picayune since 1993.

Mason says he knew immediately “that was the picture.” He also knew Hauschild. She was one of his students. Mason transmitted the image on the UPI wire less than an hour after it was taken, Grunfeld says.

“All of a sudden everyone’s trying to get hold of me,” says Grunfeld, who was 27 at the time. “New York is calling, wondering if I shot it in color. It was the infancy of color and everyone wanted to run it on the front page. The answer was no, I didn’t have color.

“I also didn’t understand the impact of the image. I knew I had a picture but I was a young kid and I didn’t appreciate the impact of what it represented.”

Hauschild says she didn’t understand it either—not until the letters started coming.

For months after the bombing, Hauschild and her family received dozens of cards and letters, totaling at least 100, from people around the world expressing their condolences. They arrived at her parents’ house and at her dorm on campus.

“Then it opened my eyes that I had been the face for this,” she says.

Hauschild says she has bags of letters and newspapers, many with her face on them, from many different countries. She wants to donate her collection to SU’s Pan Am 103 archive and hopes to visit campus for Remembrance Week soon. Hauschild owns her own business and lives with her family in Athens, Ohio. She and Grunfeld never met outside that moment on Dec. 21, 1988, but recently connected on Facebook.

Grunfeld says the photo is one that he will always remember.

“She represented how everyone else felt, and not just the grieving student body but the whole Syracuse University community,” he says. “I always hope that I have the courage to put the camera up to my eye and shoot the picture without disrupting the moment of someone’s grief. And then to have the courage of getting into someone’s life so abruptly. I needed to know what her name was.”

In that moment, Grunfeld says, he was a journalist first. But he too, was grieving. Fast forward 17 years and Grunfeld found himself again covering tragedy at home with Hurricane Katrina. The Times-Picayune won several Pulitzer Prizes for its coverage of the storm.

“The correlation between Pan Am and Katrina was that I was covering a disaster in my own community,” he says. “It’s much easier to parachute into a disaster when it’s not your own. But that’s what you go to school for, train for, hope for—that I can do my job during a very difficult time.”

Hauschild, a mother of four, still finds it difficult to talk about the victims of Pan Am Flight 103. She knew several personally and says the 25th anniversary has brought back many memories.

The Pan Am Flight 103 bombing was an unprecedented act of terror on an international scale.

“It was the first act of terrorism,” she says. “It redirected the course of history, really for the rest of our lives.”

Grunfeld says he’s humbled to have documented such an important moment for Hauschild, and the world.

“Whenever I have moments that are personal that seem to affect people universally, it reminds me how important my job actually is, to show what life is, and I enjoy that,” he says. “I still appreciate the power and pursuit of trying to make meaningful and powerful images that resonate universally.”