‘Holidays at Hendricks’ to Be Broadcast on Television, Radio this Month 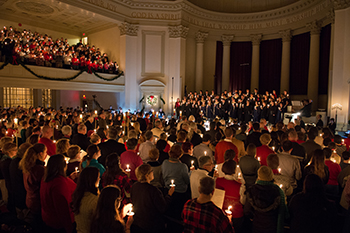 Concertgoers hold candles and sing “Silent Night” at the end of the Holidays at Hendricks concert.

This year’s concert was co-organized by Peppie Calvar and James T. Spencer, directors of the Hendricks Chapel Choir and SUBE, respectively. The program featured an increased emphasis on student talent, as evidenced by guest performances by the Syracuse University Singers, directed by John Warren; Windjammer, SU’s vocal jazz ensemble, led by Jeff Welcher; and handbell ringers from SU’s Setnor School of Music and Plymouth Congregational Church under the direction of Maddie Horrell, a graduate student in music education in the Setnor School of Music in the College of Visual and Performing Arts and the School of Education. Although it features many SU faculty and alumni, SUBE also has a student component.

During the concert, the groups performed both individually and in combination. “Holidays at Hendricks” includes traditional favorites, such as “Deck the Halls” and “Jingle Bells,” alongside holiday-oriented pieces from the classical repertoire, including the opening movement from J.S. Bach’s “Christmas Oratorio” and a setting of “Wake Awake” by St. Olaf Choir founder F. Melius Christiansen. In keeping with Hendricks Chapel’s inclusive interfaith vision, a variety of sacred and secular pieces are included. The concert closes with the traditional candle lighting and singing of “Silent Night.”