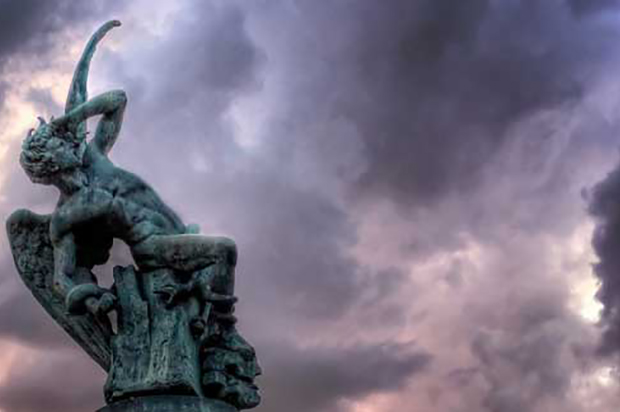 The Perpetual Peace Project explores how to move the world away from a constant state of war.

Although the Perpetual Peace Project’s (PPP) coming-out party was the 2010 Syracuse Symposium, Professor Gregg Lambert says the initiative can trace its roots to an event some 13 years earlier in South Africa.

The event in question was the commemoration of the 20th anniversary of the death of anti-apartheid activist Steve Biko. The speaker that day was 79-year-old Nelson Mandela, who deemed it time to “redress the legacy of oppression.”

“[It] will be achieved by each of us respecting ourselves … and respecting the humanity in each one of us,” he told a rapt audience in the coastal town of East London. “It means an attitude of mind and a way of life that appreciates the joy in the honest labor of creating a new society.”

Mandela would retire from active political life less than three months later, but not before his Biko speech went down in history. Many consider it one of the high-water marks of his presidency.

“Nelson Mandela believed that the idea of peace was not something abstract that belonged to the future,” says Lambert, founding director of the SU Humanities Center and Dean’s Professor of the Humanities. “He felt it was embodied in the actions of extraordinary people. Peace is what one does in the present—not what one hopes for in the future, since the future comes about only through our actions.”

One of those “extraordinary people” was Mandela. Case in point: His now-famous Biko speech was the subject of PPP seminars at the University of Pennsylvania and SU in 2010. (At SU, the seminar was part of Syracuse Symposium’s theme of “CONFLICT: Peace and War.”) Lambert selected the speech for a variety of reasons, not the least of which was its compelling evocation of the futility of war. 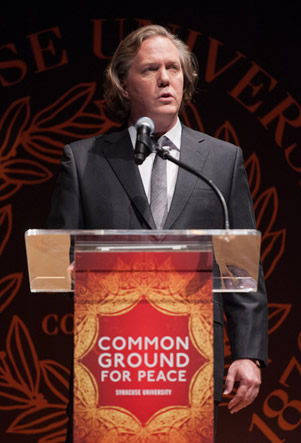 “We used this speech, along with those by President Obama, Martin Luther King Jr., and Mahatma Gandhi, to reframe the idea of perpetual peace for the contemporary world,” Lambert says. “Students were asked to consider and develop their own perspectives, so that fresh understandings of peace and conflict were able to emerge.”

Since Mandela’s death on Dec. 5, Lambert has been preoccupied with thoughts of Mandela, whose legacy exemplifies the core values of Immanuel Kant’s 1795 essay “Perpetual Peace,” from which PPP draws its name and inspiration.

“Although Kant and Mandela were separated by two centuries and thousands of miles, they understood the basic conditions for peace,” Lambert says. “They also knew that no one person or institution could lay claim to the concept of peace. To them, peace meant working together, to bring about a more humane society. And that’s what we attempt to do in PPP.”

PPP was established in 2008  by the SU Humanities Center, in conjunction with the Slought Foundation in Philadelphia and the European Union National Institutes for Culture, based in Brussels.

The project is the brainchild of Lambert. Along with Aaron Levy, founding executive director of Slought, and Martin Rauchbauer, then a diplomat in the Austrian embassy who has since taken over Deutsche Haus at New York University, Lambert has transformed PPP into a multilateral curatorial program.

“Our original intention was not to formulate public policy, but to conceptualize a peace movement, by raising questions about how such a movement might occur,” Lambert says. “Initially, we created initiatives that brought together theorists and practitioners to create what we hoped would become a common space for discussing peace and international law.”

The result was a flurry of high-minded initiatives along the East Coast, including a documentary film and an art exhibition, both of which premiered at Manhattan’s New Museum of Contemporary Art; a daylong symposium at the International Peace Institute; and various academic workshops and seminars.

“The Perpetual Peace Project was conceived as a response, from a humanities perspective, to current global events that has been mostly absent from legal and political discussions by experts and contemporary state actors,” Lambert says. “Kant’s overriding goal transcended short-term interests and quotidian conflicts—that by departing from a state of nature, as defined by wars and violence, and entering into a peaceful state of society, one went beyond mere security, in addressing the political possibilities of global society.”

In 2011, Lambert began offering programming that was more ambitious and mainstream. Witness the Eat Together for Peace initiative that he helped organize on campus last fall, followed by a two-day forum with the Dalai Lama. Lambert has been on an academic sabbatical for much of 2013-14, culminating in this fall’s Visiting Distinguished Professorship in the Centre for the Humanities at Utrecht University in the Netherlands. He has recently given a successful PPP keynote address at the University of New South Wales in Australia).

Lambert is particularly proud of his visiting professorship, which coincided with the 300th anniversary of the Treaty of Utrecht, a series of accords signaling the rise of the British Empire. For the tricentennial, he helped commission a collection of short films and critical essays, inspired by Kant’s six preliminary articles on perpetual peace among states. Among the contributors to the series, collectively titled “Redrafting Perpetual Peace,” were SU professors William C. Banks and Louis Kriesberg.

As Lambert prepares to return to campus, he shows no signs of slowing down. He is currently ramping up for a two-year histories of violence project, founded and directed by Brad Evans, senior lecturer in international studies at the University of Bristol in the United Kingdom. Organized in part by PPP, the project examines the theoretical, aesthetic and empirical dimensions of mass violence.

Picasso’s “Guernica” expresses the horrors of war. It was inspired by the bombing of a Spanish village during World War II.

Lambert is also working with Rosi Braidotti, a leading philosopher and feminist theoretician, on an updated version of Kant’s essay, featuring contributions from PPP’s retinue of philosophers, sociologists, legal theorists, artists and activists. Designs are also afoot to bring the aforementioned art exhibition, which has since traveled overseas, to SU.

As if that’s not enough, Lambert is knee-deep into his four-year term as a member of the International Advisory Board of the Consortium of Humanities Centers and Institutes and is preparing for a major summit at the Chicago Humanities Festival.

“At the beginning of ‘Perpetual Peace,’ Kant writes that the only peace humankind knows is the peace of the graveyard,” Lambert says. “His entire treatise—and, by extension, our work with the Perpetual Peace Project—is intended as a refutation of this sentiment, by proposing a political and legal framework for world citizenship and cosmopolitan rights. ‘Peaceful’ may not always mean ‘friendly,’ but by improving legal relationships between peoples, we can reduce the devastation and suffering caused by war.”