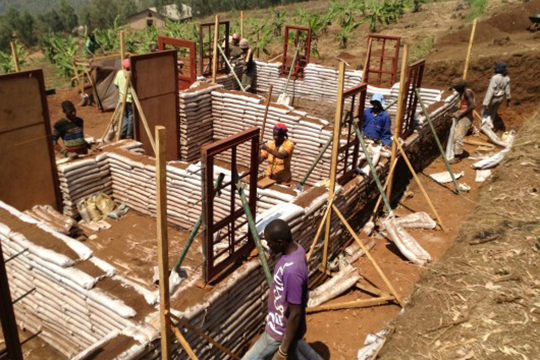 Earthbags are used to build a house in Masoro, Rwanda. GA Collective aims to build 50 houses in partnership with Dushyigikirane.

Soon after Yutaka Sho graduated from Harvard University’s School of Design, she and some colleagues received a travel grant from the Deborah Norden Fund of the Architectural League of New York to do research in Rwanda. They wanted to look into reconstruction processes after the African country’s infamous genocide of 1994.

They discovered a country where the genocide changed the society. More than 70 percent of Rwanda’s remaining adult population was female, many men having been killed in the violence or jailed for their participation. Many of the women are widows; many children grew up as orphans. Women’s roles, which had been limited before the genocide, were expanded by necessity.

The Rwandan government had started in 1996 carrying out a policy of “villagization”—gathering the scattered population into villages in order to make it easier to provide services. In the process, almost everyone was being moved away from their family and friends and then not receiving the services they had been promised anyway, says Sho, now an assistant professor in SU’s School of Architecture. 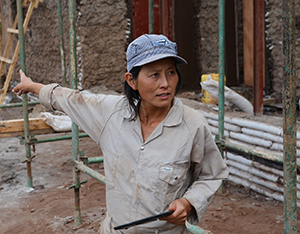 Yutaka Sho works at the site of the prototype house in Masoro, Rwanda.

“Rwanda was moving every single person,” she says. “This made life very difficult, especially for the landless rural people.”

Sho and her companions looked at reconstruction efforts throughout the country and women’s role in it. They made contact with a handful of women’s organizations, and were especially impressed with one, Dushyigikirane in the town of Masoro. The organization’s 600 members had already accomplished a lot on many different fronts—social, economic and cultural. Now it wanted to build its own village so the population would not have to move.

“The government would allow them to stay where they were if they had the money,” Sho explains. “Otherwise, they would have to move away from their community.” Dushyigikirane hoped to build 50 houses.

Sho and her companions, two architectural and a landscape architectural designers, offered their design services to Dushyigikirane for the new village, establishing GA Collaborative (GA Collaborative was incorporated as a 501(c)3 nonprofit through the efforts of Professor Deborah Kenn of the SU College of Law). Through “a bunch of mishaps,” Sho says, “we got stuck with fundraising as well.”

The four knew nothing about fundraising, so at the beginning they just approached NGOs (non-governmental organizations) and begged. They quickly found that large construction projects aren’t popular among NGOs, which like immediate results.

Eventually, they decided to use the talents they had to raise money. Sho had been to art school and knew many artists, so she established StitchWorks and recruited artists to make designs inspired by African textiles to sell. The result was 14 designs, which can be viewed, and ordered, at http://www.tinyshowcase.com/artwork.php?id=2002.

Prototype fabric has been printed with the help of Associate Professor Janet Ambrose of the College of Visual and Performing Arts. For the time being, the prints can be bought only on paper. In a second phase they will be printed on fabric, but the cooperative has so far been unsuccessful in finding a manufacturer.

Fourteen prints are available for sale to benefit the building of Earthbag houses in Masoro, Rwanda.

Through sales of the prints and the Arnold Brunner Grant, GA Collaborative gathered enough funds to build a prototype house this past summer. The house features three small bedrooms, a living room and a separate space for cooking.

Rwanda is short on building materials, so GA Collaborative had to be resourceful. There is wood, but a national law requires that anyone who cuts down a tree must plant another one. Since their clients are poor, they don’t have the funds to do this. So GA Collaborative turned to building with EarthBags.

EarthBags are polypropylene bags that are used “everywhere” in Rwanda, Sho says, for carrying vegetables, charcoal and many other things. So to make EarthBags, the polypropylene is stuffed with the other thing that is readily available in Rwanda—soil.

Skills for the future

Eternally Solar, a South African company, had devised a system to build with EarthBags that did away with the need for barbed wire for joining between layers, which cuts costs. So GA Collaborative invited specialists from the company to teach them and the villagers their method. Now many villagers have a trade that can potentially support them after their own village is constructed.

By next summer, or perhaps before the next rainy season hits in March, GA Collaborative hopes to have the funds to build its next building. Despite the savings of using EarthBags, each structure costs about $20,000 for bags, tools and the plaster to cover the finished building, as well wages to support the villagers while they work on the project.

GA Collaborative hopes to make this next building two stories without concrete pillars, a first for an EarthBag building. In addition to a family home, it will incorporate an office for the association, an information center and storage.

GA Collaborative has run into some criticism for its project. One critic posted on Twitter that Sho and her colleagues can’t make a dent in the housing needs of Africans, and shouldn’t be assuming they can “help” the Rwandans, who are capable of running their own lives.

Sho read the critical words thoughtfully. While she agrees that outsiders should not come in and decide what the Rwandans should do to improve their lives, GA Collaborative has been careful to structure the design and construction process in such a way that Dushyigikirane has been an equal partner at every step.

“Everyone deserves to have good design,” Sho says.