Syracuse University’s Dean of The College of Arts and Sciences, George M. Langford, today announced that he will complete his term as dean on June 30, 2014. Appointed dean in 2008, Langford plans to return to full-time teaching, research and mentoring students in his academic specialty of cell biology and neuroscience at the conclusion of his deanship. 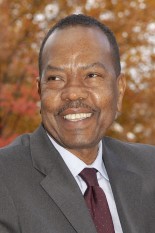 In recognition of his outstanding scholarly achievements over the course of his career, his history of mentoring students in research and his service to the nation, Interim Chancellor and Provost Eric F. Spina is announcing his appointment of Dean Langford as a Distinguished Professor of Neuroscience at Syracuse University. A nationally known neuroscientist and cell biologist, Langford served as a Distinguished Professor at the University of Massachusetts Amherst; was the Ernest Everett Just Professor at Dartmouth; was a member of the National Science Board and is active in service to NIH, NSF and several scientific foundations; and was recently appointed a fellow of the American Association for the Advancement of Science (AAAS).

Langford brought to the deanship commitments to advancing the interdisciplinary strengths of the college by encouraging scholarship clusters and promoting cross-campus collaborative initiatives. Among the highlights of his tenure are:

Spina says Langford introduced the concept of ILMs to the University and has been instrumental in promoting development of SU’s distinctive interdisciplinary clusters and fostering a spirit of collaboration with both campus and community partners. “George came to SU with a deep understanding that the problems we face today increasingly require input and expertise across disciplines and sectors, and his leadership in that regard has been outstanding,” says Spina.

“He also has played a critically important role in increasing and enhancing the ranks of faculty. We’ve been fortunate to have him at the helm these last six years and I have no doubt he will continue to enrich the scholarly life of the institution in his new capacity as Distinguished Professor of Neuroscience.”

In the humanities, Langford supported the growth of the Humanities Center and established the Janklow Arts Leadership Program. Working in collaboration with the Office of the Chancellor, he supported the development of La Casita Cultural Center on the city’s Near West Side to promote awareness of the region’s Latino/Latin American arts and culture community. La Casita also served as a conduit to many University programs and courses and brought students into the community. Recently, Langford opened the new Point of Contact Gallery (POC) at the Nancy Cantor Warehouse.

During his tenure as dean, the college added five new endowed chairs and raised a total of $60 million as part of the University’s recently concluded Campaign for Syracuse University. Altogether, the college benefited from generous campaign gifts from alumni, parents, friends, corporations and foundations that are now being used to support students, build critical new facilities, expand endowed professorships and enhance teaching and research.

“This is an exciting and dynamic time for The College of Arts and Sciences and for Syracuse University,” says Langford. “I am extremely proud of what has been accomplished during my tenure in this challenging period of adjustment to new technologies, new teaching paradigms and new financial realities. We have achieved a great many of the objectives I came here to pursue—particularly in the realm of strengthening the faculty and interdisciplinary scholarship—and advancing our standing as a premier liberal arts college. We enhanced the University’s representation in the sciences; expanded research grant support; developed and implemented innovative programs; and fostered relationships on campus, in the greater Syracuse community and with our alumni across the country. While there is never a perfect time to end one’s term as dean, this is a logical time as the University transitions to a new Chancellor. I want to thank Chancellor Cantor as well as Interim Chancellor Spina for the opportunity to serve as dean of the college for the past six years, and I look forward to rejoining the ranks of the faculty.”

Before resuming his faculty post, Langford will take a one-year sabbatical, during which he will divide his time between the Marine Biological Laboratory at Woods Hole, Mass., and the Howard Hughes Medical Institute (HHMI) in Chevy Chase, Md. His research during that time will focus on the application of new “super resolution” imaging techniques and big data to analyze membrane trafficking patterns in nerve cell axons/dendrites and remodeling of the synapse during learning and memory. He will also work with HHMI to increase the academic participation of underrepresented minorities in STEM fields.

A long-time proponent of interdisciplinary teaching and research, Langford joined SU after serving as dean of the College of Natural Sciences and Mathematics at University of Massachusetts Amherst. Before that he was the Ernest Everett Just Professor of Natural Sciences and professor of biological sciences at Dartmouth College. He also has served on the faculties of the University of Massachusetts Boston, Howard University and the University of North Carolina Chapel Hill, and held leadership positions with the National Science Foundation, Marine Biology Laboratory and Argonne National Laboratory. A longstanding advocate for supporting minority student success in the sciences, he served as inaugural chair of the American Society for Cell Biology’s Minority Affairs Committee.

Spina has indicated that he will begin discussions early in the new year with Chancellor-designate Kent Syverud and the faculty about a process to identify Dean Langford’s successor.