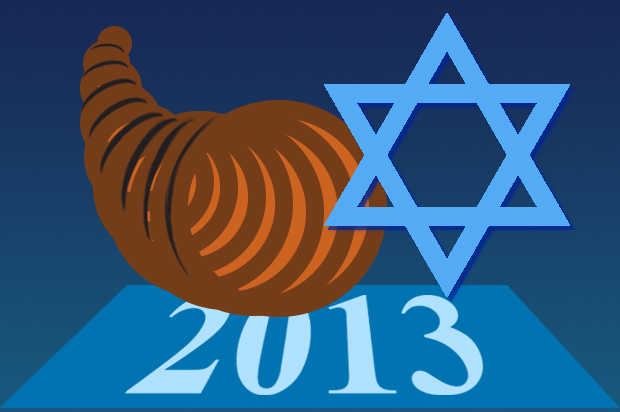 Thanksgiving and Hanukkah coincide this year for the first time in more than a century.

On Thursday, Nov. 28, Americans of the Jewish faith tradition will celebrate two holidays—Thanksgiving and the first day of Hanukkah.

This convergence hasn’t happened in more than a century, and is not expected to happen again for nearly 70,000 years. Hanukkah is dictated by the Hebrew calendar, which is lunar; Thanksgiving is fixed on the Gregorian calendar as the fourth Thursday in November.

According to Religion News Service, “Thanksgivukkah” has inspired people to devise creative ways to celebrate the combined holiday. A 9-year-old in Brooklyn has invented a “menurkey,” a Hanukkah candelabra shaped like a turkey. Others have developed recipes for pumpkin latkes (potato pancakes served at Hanukkah celebrations) and turkey brined in Manischewitz (kosher wine). Recipes for sweet potato kugel and latke stuffing are available on the Internet.

Brian Small, executive director and director of programming and student engagement at Syracuse University Hillel, says Hanukkah is a cultural celebration of victory over persecution. The holiday celebrates the victory of the Maccabees over their Greek oppressors in the second century B.C. The eight lights of the menorah represent the eight nights that oil—only enough for one day—burned during the rededication of the temple of Jerusalem.

Thanksgiving, a holiday with roots back to the Pilgrims establishing a new American colony in the 1600s, is the quintessential American holiday. It was declared as a federal holiday by President Abraham Lincoln in 1863.

With an increasing secularization of the Thanksgiving holiday, Small has encouraged students to view the combined holiday as an opportunity to come back to the true meaning of thankfulness and celebration. He has been talking to students in particular about “birkat hamazon,” a Hebrew blessing meant to acknowledge God’s blessings with great fervor that is said after meals.

Ediva Zanker, a junior from Park City, Utah, majoring in magazine journalism in the S.I. Newhouse School of Public Communications, has been researching the convergence of the holidays this year, and said she is glad they fall on the same day. “Hanukkah isn’t the biggest holiday in the Jewish religion. This year, my family is thinking about Hanukkah more now that the two holidays coincide,” she says.

Hanukkah, like Thanksgiving, is about giving thanks, Zanker says. “It is easy to forget that it is a holiday dedicated to giving thanks,” she says. “Like Christmas, Hanukkah has become very commercialized. Presents and chocolate gelt have become the focus, when the holiday is so much more than that.”

Emma Fierberg, a junior photojournalism major in the Newhouse School from West Hartford, Conn., will be celebrating the combined holiday in Brooklyn with family. “It is definitely interesting and something out of the ordinary to celebrate Hanukkah and Thanksgiving at the same time this year,” she says. Her family will be lighting candles and giving gifts to the children on Thanksgiving, as well as enjoying good food (including pecan pie and turkey-shaped cookies) and lots of family time.

The Zanker family will move their tradition of making latkes on the first day of Hanukkah to the second day, and enjoy Thanksgiving dinner on Thursday.

The combined holiday will have special meaning in the Small house this year as well. Small and his wife, Shannon, welcomed their first child, Danielle, in January, so the combined holiday falls on her first Thanksiving and Hanukkah. “She will definitely be enjoying some turkey this year,” he says.