Three members of the Syracuse University community were named among Syracuse’s 40 under FORTY for 2013. The annual award, presented this year at a Nov. 20 luncheon at the Oncenter in downtown Syracuse, recognizes 40 ambitious, civic-minded individuals under the age of 40.

The SU honorees are Ryan J. Barker, assistant director of the Office of Housing, Meal Plan and I.D. Card Services; Jessica H. Reed, manager of digital and social media in the Office of Enrollment Management; and Katie Scanlon, academic coordinator in the Department of Athletics.

Barker is currently in his 10th year of employment at the University. He began his professional career at the University in July 2004 as assistant director of student affairs, a position he held until August 2006, when he moved into his current role.  He has also served the University as a member of the University Senate and has taught a SummerStart seminar course.  Prior to Syracuse, he spent several years working in Residence Life and Leadership Programs at Cazenovia College. Barker received a bachelor’s degree in biology from Le Moyne College and a master’s degree in higher education administration from SU’s School of Education.  He serves the local community as both a certified New York State track and field official and as a member of the board of directors of the Trevor Lanigan Foundation, Inc., which serves to promote awareness of esophageal cancer and raise scholarship and research funds in memory of Barker’s late friend.

Reed is a communications professional whose career in both higher education and nonprofits has focused on public relations, social media, marketing and relationship management. In addition to her position in enrollment management, she is an adjunct instructor in the public relations department of the S.I. Newhouse School of Public Communications. Reed is involved in many community organizations, including as the publicity and online media chair for the Central New York chapter of the Public Relations Society of America; as an advisory board member for Social Media Breakfast Syracuse; and as a board member and the public relations and communications director for the Central New York Chapter of Girls in Tech. Reed received her bachelor’s degree in corporate communications from Lycoming College in Williamsport, Pa., and her master’s degree in public relations from the Newhouse School. 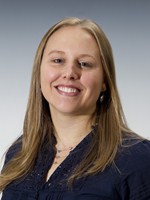 Scanlon works in the Stevenson Center for Student-Athlete Development at SU, specifically with the men’s and women’s lacrosse teams and the field hockey team. She has been in student-athlete support since 2006 and worked previously at the University of Dayton and University of New Mexico before moving back to Upstate New York. She received a bachelor’s degree from Canisius College and a  master’s degree from the University of Dayton. She is currently enrolled in the higher education Ph.D. program in the School of Education. Scanlon is a member of the National Association of Academic Advisors for Athletics and the Syracuse chapter of Contemplative Leaders in Action.