Using art to develop language and literacy was the theme of a recent two-day institute at the Everson Museum of Art in Syracuse. Among the organizers was Amanda Brown, assistant professor of linguistics in The College of Arts and Sciences. 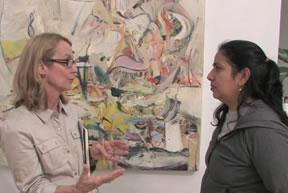 CALTA21 is the brainchild of Patricia Lannes, left.

The program was part of a new initiative called Cultures and Literacies Through Art for the 21st Century (CALTA21), funded by a National Leadership Grant from the Institute of Museum and Library Services.  Invited speakers were Patricia Lannes, co-founder and director of CALTA21; and Kitty Bateman, associate professor of basic education skills and director of literacy at the City University of New York’s Queensborough Community College, who has spearheaded much of the curriculum’s implementation.

“CALTA21 uses visual literacy to empower adult language learners, while strengthening their literacy and critical thinking skills,” says Brown, whose expertise includes second-language teaching and learning. “Much of this work relies on partnerships among museums, colleges and universities that provide opportunities for meaningful intellectual activities.”

“The core principles [of CALTA21] are to develop not only academic capital, but also social, cultural and civic capital,” says Lannes, former education director for the Nassau County Museum of Art on Long Island. “CALTA21 is based on the premise that visual literacy skills are transferable to other literacies, and that art can be a powerful conduit to finding meaning in text.”

Central to CALTA21 is a range of pedagogies designed to foster language learning. One approach is a learner-centered, inquiry-based teaching method called Visual Thinking Strategies (VTS), which the Everson uses in its docent-led museum tours. A typical VTS sequence might involve a teacher facilitating an open-ended discussion about carefully chosen works of art. Students, in turn, would be expected to talk about what they saw, back up their ideas with evidence, listen to and consider the viewpoints of others and discuss other possible interpretations. 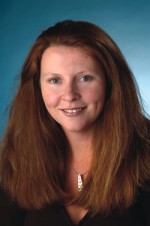 “Art provides a rich stimulus through which to develop language,” Brown says. “Although CALTA21 was designed for English language learners, the curriculum cuts across language and national borders and, in principle, may be applied to the teaching of any language. [The City of] Syracuse is an especially good place to implement CALTA21 because it has a highly multicultural, multilingual population.”

Isome agrees, pointing out that Syracuse is a resettlement hub for refugees. “In addition to language proficiency, the curriculum offers a variety of essential pre-employment skills. CALTA21 makes refugees feel more confident, like they belong to a local community,” she says.

The CALTA21 institute was attended by representatives of SU, OCC, the Everson, JOBSplus!, the Westside Learning Center, Boards of Cooperative Educational Services, the Syracuse Educational Opportunity Center and the Syracuse City School District. Some participants also taught foreign languages, such as Spanish, French, Japanese and Turkish.

A follow-up meeting is scheduled for January 2014 at the Everson. For more information about local implementation of CALTA21, contact Brown at abrown08@syr.edu.