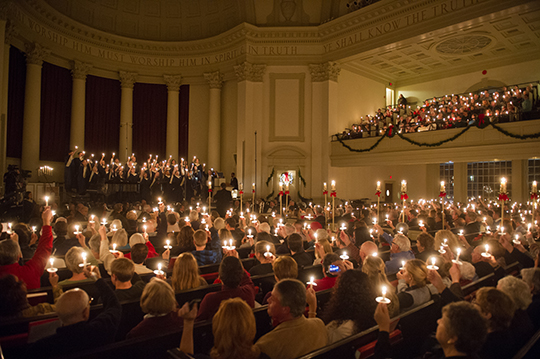 A candle-lit singing of “Silent Night” is the traditional end of the Holidays at Hendricks program.

This year’s concert is co-organized by Peppie Calvar and James T. Spencer, directors of the Hendricks Chapel Choir and SUBE, respectively. The program features an increased emphasis on student talent, as evidenced by guest performances by the Syracuse University Singers, directed by John Warren;  Windjammer, SU’s vocal jazz ensemble, led by Jeff Welcher; and handbell ringers from SU’s Setnor School of Music and Plymouth Congregational Church under the direction of Maddie Horrell, a graduate student in music education in the Setnor School of Music in the College of Visual and Performing Arts and the School of Education.

Although it features many SU faculty and alumni, SUBE also has a student component. “For years, we’ve made it a point for our student performers to sit alongside and be mentored by their faculty counterparts,” Spencer says.

Through a unique collaboration between SU and WCNY, the 90-minute concert will again be broadcast in late December by WCNY on television and radio.

During the concert, the groups will perform both individually and in combination. “Holidays at Hendricks” will include traditional favorites, such as “Deck the Halls” and “Jingle Bells,” alongside holiday-oriented pieces from the classical repertoire, including the opening movement from J.S. Bach’s “Christmas Oratorio” and a setting of “Wide Awake” by St. Olaf Choir founder F. Melius Christiansen. In keeping with Hendricks Chapel’s inclusive interfaith vision, a variety of sacred and secular pieces will be offered.

The concert will close with the traditional candle lighting and singing of “Silent Night.”

The SU Brass Ensemble, part of SU’s College of Arts and Sciences, is composed of members of the SU faculty, staff and students, the SUNY Upstate Medical University faculty and staff, and accomplished musicians from surrounding communities. The national award-winning Brass Ensemble presents about 18 performances per year. The ensemble’s repertoire includes music from all major musical periods and often features new compositions commissioned by nationally known composers.

Windjammer is Syracuse University’s vocal jazz ensemble. The group performs several styles of jazz, including swing, bop, contemporary, Latin, and blues, with an emphasis on vocal improvisation. Auditions take place at the beginning of each semester. Comprised of no more than 16 voices, the group performs literature from the most current catalogs of vocal jazz writers and arrangers. An additional rhythm section performs with Windjammer.

DVDs of the 2012 Holidays at Hendricks performance are available in the SU Bookstore.

For more information on the concert, contact Hendricks Chapel at 443-2901.