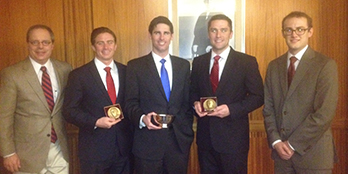 Matthew Kranzthor L’14 won best advocate of the competition. The team won second best brief, scoring in the 90s for the third time over the past four years. Finally, all team members were awarded this year’s Justice Lewis F. Powell Medal for Excellence in advocacy by the American College of Trial Lawyers for the National Appellate Moot Court Competition.

The team has won best advocate and advanced to nationals on average every other year for the past eight years. Team members attributed their win to hard work and dedication, to the College of Law’s commitment to its Moot Court program and to College of Law faculty and its Legal Communication and Research program for their analytical and brief writing skills.

The competition, now in its 64th year, is the oldest and longest-running appellate competition in the United States, according to its sponsor, the New York City Bar Association. This year, the competition hosts 193 teams from 131 law schools across the country.