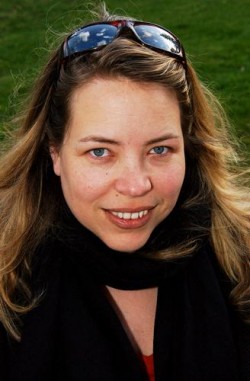 Poet Jane Springer will conclude Syracuse University’s Fall 2013 Raymond Carver Reading Series at 5:30 p.m. Wednesday, Dec. 4, in Gifford Auditorium. A question-and-answer session will precede the reading from 3:45-4:30 p.m. The event is free and open to the public. Parking is available in SU’s paid lots.

Springer’s books include “Murder Ballad” (Alice James Books, 2012) and “Dear Blackbird” (University of Utah Press, 2007). She is an assistant professor of English at Hamilton College.

Ploughshares described “Murder Ballad” as “a tangled ode to the South, filled with coon stew, frog guts, pig shit, the violence of rape, slavery and regret. Springer wrote it with the deep, sisterly love of a drunken, wayward brother she knows better than anyone.” The collection was named co-winner of the 2013 New England Poetry Club Sheila Motton Prize. Springer was selected as the 2011 winner of the Beatrice Hawley Award for the collection; the poem “Murder Ballad” in 2011 was awarded a Pushcart Prize.

Her poetry has been published in online journals, including AGNI, Poetry Daily and Verse Daily; and in print journals, including the Cincinnati Review, New Letters, Lyric and the Southern Review. She recently won a MacDowell Fellowship for a residency at the Colony in Peterborough, N.H., the nation’s leading artist colony. In 2010, she was one of 10 recipients of the 2010 Whiting Writers’ Award by the Mrs. Giles Whiting Foundation, and she won a 2009 grant from the National Endowment for the Arts.

The Whiting selection praised Springer for making “splendid connections between the narrow world she knew as a child and the intimate rhythms she acquired as a poet. She is a poet full of verve and lyrical passion, a new and authentic American voice. … She’s not afraid to get her hands dirty and play in the mud of Poetry Land.”

Her first poetry collection was awarded the Agha Shahid Ali Prize. “Dear Blackbird” was inspired by Springer’s then 3-year-old son’s interest in “The Wonderful Wizard of Oz,” and nearly every poem in the collection includes a reference to the story.

J.D. McClatchy, editor of the Yale Review and judge of the 2011 Agha Shahid Ali Prize, said Springer’s writing “leaps to its tasks with a heady extravagance” and calls “Dear Blackbird” “her letter to the world, as eerie as Dickinson’s.” The pages “don’t depend on a sequence of neat stanzas, but are a surge of incantatory phrases and feelings,” McClatchy wrote. “The skin of each poem quivers with the mind’s contradictions, the heart’s panic. It is risky, not merely reckless; rapturous, not merely rapacious. Memories spill over fantasies, Southern lore collides with hipster know-how.”

In a review of “Murder Ballad,” the poet Lynnell Edwards says Springer’s “long line is fearless in its music, indulging luscious sounds and pounding measures. Traversing the despair of the rural south, [she] exploits the urgency and dread of every keening murder ballad, showing how that cleaving is both our undoing and our salvation.”

“I was born in a Tennessee sanatorium hours after my mother’s father died & I know how the womb becomes a salt-sea grave,” she writes in the poem “Salt Hill,” published in “Murder Ballad.”

collection plate’s felt palate & I know/ the soul’s barn debt to past generations, too,” she continues.