A Video in Courage 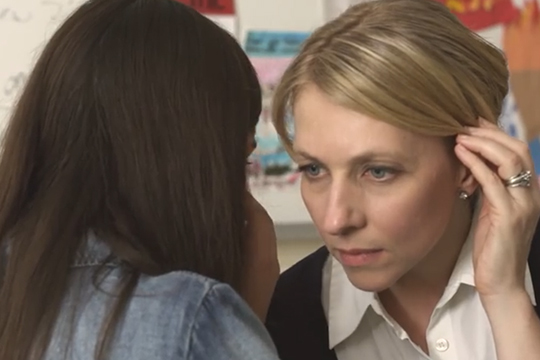 In Kevin’s Gendron’s PSA, a child whispers to her teacher after all the other students have left the class.

Kevin Gendron ’17 has given a voice to the most vulnerable of victims in society—as part of a project that doesn’t say a word.

“Stand Up, Step Forward” is a compelling one-minute video that encourages victims to find the courage to report incidents of abuse and urges the trusted adults they confide in to act. It gained a national presence this week, appearing during a commercial break on Comedy Central’s  “The Colbert Report.”

The video shows a classroom that empties of students, leaving one young girl. The student guardedly approaches her teacher and whispers in the teacher’s ear. The teacher stands up and takes the student’s hand, and they leave the classroom together.

The only audio is a simple piano composition.

“It’s really so much more powerful when you allow the audience to infer for themselves what’s going on without words, let people draw their own connections,” says Gendron, a Newhouse advertising student.

Gendron first started working with the PSA’s producer in his hometown of Portsmouth, N.H., while volunteering for Portsmouth Public Meetinghouse TV in his junior year of high school. Executive Director Bill Humphreys referred Gendron to media producer Peter Connors, who was looking for an assistant on a project.

“I helped him work on the project and he thought we had a pretty solid partnership, so I ended up working with him the entire summer my junior year,” Gendron says. “I came back my senior year going into my freshman year at Syracuse, and he thought it would be a good idea to do a capstone, which turned out to be the PSA.”

The idea behind the PSA initially developed while Gendron was screening “Pursuit of Truth: Adult Survivors of Child Sexual Abuse Seeking Justice” as a member of the New Hampshire Festival Screening Committee over the summer.

In the documentary, former professional hockey player Sheldon Kennedy, an advocate for victims of sexual abuse, stated that it takes a child to ask—on average—seven adults before they are taken seriously, Gendron says.

Gendron was jarred by that fact.

“We collaborated for a while and came up with the idea of ‘Stand Up, Step Forward,’ so that a child doesn’t have to ask so many adults before they can be helped,” Gendron says. He worked with co-writer David McHugh on the PSA.

“From there, it spawned the idea of this little girl sitting in the back of the classroom. Everyone empties out, she gets up, tells her teacher and the first thing the teacher does is stand up and bring the girl out of the classroom,” he says. “So once we came up with the tagline, it just worked itself out from there.”

The PSA was shot in July and Gendron worked on editing the piece until he came to Syracuse.

An experience in video

He appreciated the opportunity that Humphreys and Connors gave him and working with McHugh, who is also the screenwriter for “Bad Teacher,” and the rest of those involved in the PSA.

“This experience exposed me to the nuances of advertising; I had no appreciation for what goes into creating a short commercial. The video is a minute long, but it took three months to create,” Gendron says.

“There’s still much to learn, but I at least have an understanding of the challenges of making one of these videos.”

The campaign was launched on Monday, but the viewing on national network Comedy Central was extra special.

“It’s incredible seeing your own work displayed in front of millions of people,” he says. “It’s indescribable.”

Gendron looks forward to working on similar projects in the future. And this experience has solidified his interest in advertising.

“That’s the biggest thing I got out of this project; now I know what I want to do with my future,” he says.