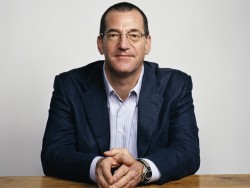 Greg Stern, CEO of Butler, Shine, Stern and Partners (BSSP), will visit the Newhouse School on Wednesday, Dec. 4, as a guest of the Eric Mower Advertising Forum. He will speak on “My Inadvertent Career: The BSSP Story” at 6:30 p.m. in the Joyce Hergenhan Auditorium in Newhouse 3. Follow on Twitter at #MowerForum.

A founding partner of BSSP, Stern has more than 30 years of advertising and marketing experience, both domestically and internationally.

He was recruited from Brown University by Ogilvy, with whom he worked in New York and Southeast Asia for 10 years, managing clients including American Express, Seagram, Unilever and Nestle. He returned to the U.S. in 1992 with Goodby Berlin & Partners, and later joined with John Butler and Mike Shine to start BSSP.

In 20 years, BSSP has grown from a startup of four to an organization of more than 155 people, working with clients including MINI, Priceline, Greyhound and US Bank, among others.

BSSP is a one of the largest independent agencies on the West Coast. It was named one of the top Places to Work in the U.S. by Outside Magazine in 2011 and 2012.

For more information about the event, contact Karen Greenfield at 315-443-2304 or kegreenf@syr.edu.