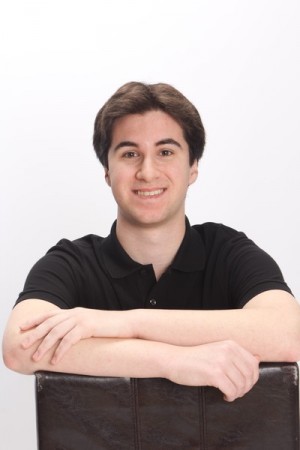 “I was surprised at first,” says Kline. “This was the first year they had it, and when they called, all they asked for was my birthday. It was a great way to kick off the semester.”

The honor and attention placed on the Newhouse student started to build last winter. Appearances on NBC’s “Today” show and in the New York Times came along with the recognition by Forbes. College coaches were well aware of Kline’s eye for talent. Now the rest of the country was finding out too.

Kline is about to begin what he describes as his busy season, even though he’s currently wrapping up a fall travel season that was his busiest in five years. “I traveled all over the place, mostly on weekends, just covering basketball and trying to stay on top of things,” says Kline. “Now it’s about to get really busy, and I think with this new recognition [in Sports Illustrated] and as more comes out, there is a shot at being super busy and there is nothing wrong with that.”

One thing other than his recruiting work and class work that keeps Alex busy is his philanthropic work. He is in the fourth year of organizing the Mary Kline Classic. It’s in honor of his mom, who died of cancer. The basketball tournament serves as a fund raiser for brain tumor research.

With all of this, how does Kline find the right balance between school and work? When does he even have time for schoolwork?

For him, it’s not difficult. “A lot of my work comes in class, news reporting, things I’ve done before,” says Kline. “The challenging part is keeping grades up and getting to class on time.”

Through his web work, Kline is experiencing much of what his professors are teaching him in class. “I was in a course on ethics in journalism the other day and my professor was going over specific examples and different types of ethics and I was thinking, I could tell a story about each of these,” says Kline. “It shows this curriculum is on the right path. I think with Newhouse it gives you the real-life experiences.”

Despite the attention, Kline says he keeps a low profile on campus, and works hard at staying grounded, not letting his success go to his head. His thoughts on the Sports Illustrated honor only serve to prove his point.

“You look at the people on the list (which includes NFL quarterback Robert Griffin III and MLB outfielder Bryce Harper) and I stick out like a sore thumb. I’m one of the few non-athletes, and just a little college student.”