In the digital age, storytelling journalism is so much more than words on a page.

And Dan Pacheco, Newhouse’s Peter A. Horvitz Endowed Chair of Journalism Innovation, wants communications students to explore all the ways that words, photos and video can be brought to life in compelling ways.

In conjunction with the project crowdfunding site Kickstarter, Pacheco is giving Newhouse students the opportunity to raise awareness of their idea for a non-fiction journalism project and possibly increase their funding support to create their project through matching funds. 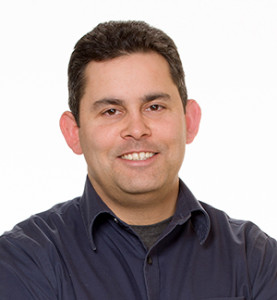 “There is so much change going on thanks to digital technology,” Pacheco says. “It’s not slowing down, it’s going faster, so that just makes it all the more important to learn how to be nimble, find niche opportunities—and that’s entrepreneurship, creativity and innovation.”

In the “Kick It Up” crowdfunding program, students with a storytelling idea or project—or who may have already submitted an idea on Kickstarter or another crowdfunding service—are asked to request a connection with the Newhouse network through Kickstarter.

Once they push their campaigns live, students can then apply for possible matching funds—up to $1,500—through the online form at http://journovation.syr.edu/kick-it-up between Nov. 20 and Dec. 9. Students are also required to submit a recommendation from an instructor from a course the student has taken that has touched upon entrepreneurship.

To get helpful tips, students can watch a webinar given to SU students by Kickstarter’s Stephanie Pereira at http://journovation.syr.edu/kick-it-up-videos. In February, students can also watch online or attend in-person training on how to run an effective Kickstarter campaign (note: the event was previously scheduled for November, but has been rescheduled).

Applications during this round from Nov. 20 through Dec. 9 must be nonfiction storytelling projects or services from currently enrolled Newhouse students.

Ten projects will be chosen in the first round, and selected projects will also be featured on a Newhouse Kickstarter page and promoted by the school, including to alumni. Kick It Up is sponsored by the Horvitz Chair, with additional support from Newhouse Dean Lorraine Branham and Interim Chancellor and Vice Chancellor and Provost Eric Spina.

Pacheco initially thought of having a contest where students could compete to create the most innovative ways of telling a story digitally. But then his plans changed.

“I started to notice that some of our students were going into Kickstarter, creating pitches and getting funding,” Pacheco says. 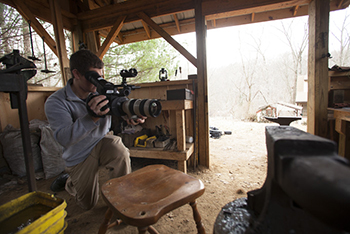 Pacheco recognized the success of students using Kickstarter, such as sophomore Luke Rafferty, who put together a storytelling piece on “The Timeless Artisans.” Rafferty and his colleague raised more than $6,000 on Kickstarter to fund their travels to document American artisans.

Pacheco also saw newsroom journalists—and others forced to become entrepreneurial journalists due to downsizing—heading to the crowdfunding site. He borrowed an idea from the Knight Foundation to create a matching program that would increase funding based on the number of backers.

“I thought, let’s encourage students and train them using these crowdfunding portals, like Kickstarter, to learn how to engage with community, and get them to support you—not just by clicking a ‘like’ button—but by giving you 5, 10 or 50 bucks,” he says.

These sites force students to think about their audience, communicate with them and get feedback, all essential for making a product that will get viewed or bought.

“The funding is the least interesting part. It’s what gets people interested at first, but when the project gets funded, that reflects that they have authentically engaged an audience,” he says.

A digital journalist and entrepreneur who created e-book service BookBrewer, Pacheco understands what it’s like to try to attract capital.

“What I love about crowdfunding for young people who are just starting out with an idea is that they can get started and learn by asking people to back them with very little risk,” Pacheco says.

And a little bit goes a long way: 75 percent of successfully funded Kickstarter projects raised between $1-10,000.

“In truth what we’re looking for is not so much to fund projects, but to use the crowdfunding process to create well-rounded entrepreneurial journalists,” says Pacheco, who has students in his “Creating the Next News Startup” course working on ideas.

“It’s really important for any entrepreneurial endeavor to have a diverse set of skills. I also want communications students to reach out to students at other colleges, such as engineering, if they need some software development or maybe reach out to business students,” Pacheco says. “The vision is for this to be mirrored at other schools and we could create a network across the University.”