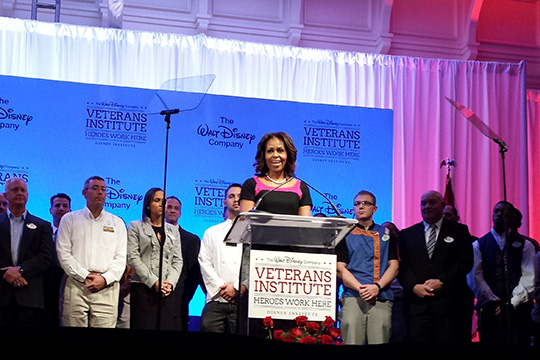 First Lady Michelle Obama advocates for veteran employment during a daylong workshop held at Walt Disney World Resort Nov. 14. Also speaking at the event, titled the Veterans Institute, was Mike Haynie, founder and executive director of the Institute for Veterans and Military Families.

As the nation took a collective pause this week for its annual tribute to those who have served in the armed forces, Syracuse University reasserted its standing as a precedent-setting leader and national force for advancing programming and services to meet the needs of veterans.

In a daylong workshop Thursday, Nov. 14, at Walt Disney World Resort, Mike Haynie, executive director and founder of SU’s Institute for Veterans and Military Families (IVMF) and a veteran of the U.S. Air Force, joined Disney CEO Bob Iger, First Lady Michelle Obama and a lineup of national experts, government officials and others in a first-ever program designed to support and encourage the hiring of military veterans. Haynie delivered the lunchtime keynote address at the event, immediately following the First Lady’s remarks. The public event, titled the Veterans Institute, was co-sponsored by Disney’s “Heroes Work Here” initiative and the Disney Institute.

In her address at the event, the First Lady encouraged the nation’s employers to recruit and develop veterans in the civilian workforce. She made her case by highlighting the IVMF and the institute’s research that demonstrates how and why hiring military veterans makes America’s companies more dynamic and competitive. 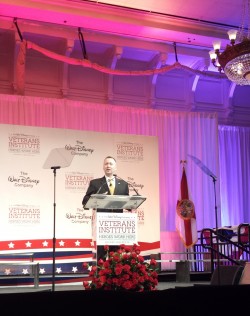 The institute’s participation in the workshop follows on the heels of several other news announcements reflecting SU’s national prominence as an institution committed to the nation’s servicemen and -women. Among the headlines:

• The IVMF has been designated a recipient of a $3.2 million Global Impact Award from Google to provide data that will help identify college and university programs, practices and services that have effectively advanced higher education success for veterans. Recipients along with the IVMF include Student Veterans of America, the Posse Foundation and Veterans of Foreign Wars.

“These multifaceted recognitions of SU’s support for veterans reaffirm our institutional commitment to scholarship and innovation dedicated to meeting the needs of our nation and world today,” Haynie says. “They not only will serve to advance our own efforts, but I hope they also will inspire others to implement the kind of innovative programming needed to meeting the complex challenges facing our veterans at this critical time in our history.”

SU’s increasingly prominent role as a leader in veterans’ issues reflects and perpetuates a longstanding institutional legacy of support for servicemen and -women, since the founding of the Student Army Training Corps in 1918 through World War II, when the University nearly tripled enrollment numbers overnight and set a national standard among universities in opening their doors to returning soldiers under the newly implemented GI Bill.

More recently, and in response to the growing influx of veterans from Iraqi and Afghanistan battle zones, SU’s Whitman School in 2007 launched the Entrepreneurship Bootcamp for Veterans with Disabilities, an effort that has been widely acclaimed as the premier entrepreneurship program for veterans in the nation. Four years later, in a groundbreaking collaboration with JPMorgan Chase, SU established the IVMF, the first university-based institute in the United States focused on addressing the unique social, economic, educational and policy issues affecting veterans and their families as the returning soldiers work to assimilate back into civilian life.

Two years ago, SU earned accolades from President Obama when he cited three of its veterans’ programs—the IVMF, the Entrepreneurship Bootcamp for Veterans with Disabilities and Women Veterans Igniting the Spirit of Entrepreneurship, another Whitman-created program now administered by the IVMF—as model initiatives for promoting successful assimilation and economic opportunity for returning servicemen and -women.