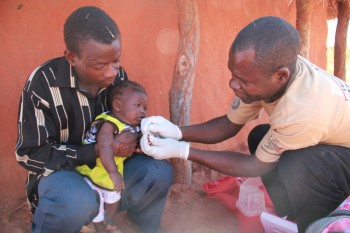 Assistant Professor David Larsen’s research involves a study with the Malaria Control and Evaluation Partnership in Africa, a program of the nonprofit health organization PATH, in which whole communities are screened—and treated, if needed—for malaria three times during the dry season. (Photo: PATH/Laura Newman)

In the Amazon port city of Belem, Brazil, David Larsen came to understand the luxury of a few pennies.

Larsen, an assistant professor of public health in the Falk College, worked among the people living in extreme poverty in the favelas, while a missionary from 2002-04. “We’d be knocking on doors and saw very close up the devastating effects of the lack of health care, clean water and sanitation,” he says. “They literally had nothing.”

And the simplest of measures—such as an ordinary antibiotic worth a few cents—could have a profound impact.

“Seeing the things that I had taken for granted as far as health care—we’re talking Tylenol, vaccines and other similar remedies—and the huge role that health played in their lives was very forming to me,” Larsen says. “It also made me think about the way disease is transmitted.”

Larsen now pursues research in infectious diseases and is currently a co-investigator on a malaria elimination study in Zambia. He cannot contain his frustration when he speaks about the children.

“About 10 million children under the age of five die every year around the world and most of those deaths occur in the first 30 days of life from infections, sepsis and tetanus, which is vaccine preventable,” Larsen says. “After 30 days of life, the leading causes are diarrheal diseases, respiratory infections and malaria—all completely treatable. Something as simple as sugar water with a little bit of salt can prevent someone from dying from diarrhea; it can rehydrate a child.”

After his work in Brazil, Larsen earned a B.A. degree in psychology, with concentrations in child and adolescent development, from Brigham Young University. He then pursued an M.P.H. and a Ph.D. from Tulane University’s School of Public Health and Tropical Medicine—inspired by his overseas work and a National Geographic article about the impact of malaria, called “Bedlam in the Blood.” 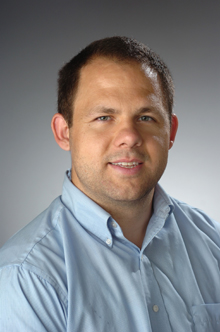 “Malaria is such a fascinating disease because it’s completely preventable and completely treatable, and it’s been that way for many years, but it’s still one of the leading killers of people around the world,” Larsen says.

Malaria, which is marked by high fever, headache and vomiting, also causes anemia, which can be especially devastating for children.

There is no vaccine for malaria, so the remedy is to stop or kill mosquitoes or keep them from biting. “Then also it’s about clearing infections quickly with a standard treatment, but one of the problems is that not all infections are linked to symptoms,” Larsen explains.

If an infected asymptomatic individual does not seek treatment, a mosquito may then bite that individual and reinfect another individual. “You can carry the parasite with you without being sick but still be a source of infection for others,” he says.

Larsen’s current three-year study involves asymptomatic infections. “I had an idea that if we could quantify the amount of transmission that would occur in a household, then we could tailor interventions to adults,” Larsen says. “When we talk about malaria control, we target interventions toward children but we’re ignoring the asymptomatic infections that are more prevalent among adults. We wanted to look at if we target the source of the infection, could we reduce the amount of transmission that way.”

Larsen, who has traveled to Africa many times, submitted the proposal to the Malaria Control and Evaluation Partnership in Africa (MACEPA), a program of the nonprofit health organization PATH and whose funding comes primarily from the Gates Foundation, in Zambia to do a small study.

“They came back and said let’s make this bigger,” he says. “They were less interested in basic science but were more interested in applications that could be scaled and really affect the malaria burden.” 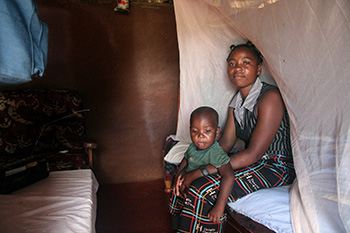 There is no vaccine for malaria, so the remedy is to stop or repel mosquitos or keep them from biting, including the use of bed nets. (Photo: David Jacobs)

It turned into a multi-year study where they progressively scaled the group to include 100,000 individuals in 40,000 households in southern Zambia, along the shores of Lake Kariba. Individuals were screened for the infection and treated; this was done three times during the dry season.

Larsen’s Ph.D. dissertation revolved around the study’s preliminary data. “We found that one round of screening and treatment didn’t affect the parasitic prevalence, but three rounds did,” he says.

His current research includes looking at other vector control measures that could complement bed nets. He is also doing research in the areas of Dengue fever and diarrheal diseases, evaluating a sanitation campaign for nonprofit group Akros and UNICEF.

Larsen, who teaches “Implementation and Evaluation” this semester and will teach “Epidemiology” in the spring, says his students would probably say he talks way too much about malaria, but he hopes to bring them even greater meaning beyond the facts and numbers.

“On one level I want to make people aware that we live in the relative lap of luxury in the United States, where we don’t think twice about these illnesses,” Larsen says. “On another level, I think we can learn a lot from the ingenuity and perseverance of people in these situations.”