Littlejohn Honored With ‘Be the Change You Wish to See’ Award 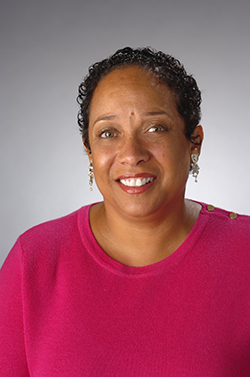 Linda Littlejohn, associate vice president for academic affairs at SU and director of the South Side Initiative (SSI), received the Student African American Society’s “Be the Change You Wish to See” award at the organization’s annual banquet on Nov. 10. Littlejohn was recognized for her work within the Syracuse community, particularly with the city’s South Side.

Since assuming her role in 2005, she has worked tirelessly to engage communities—both locally and globally—in imagining and developing connections that create stronger local neighborhoods and global ties. Littlejohn formulates, manages, coordinates and facilitates projects that address quality of life issues in Syracuse’s southern quadrant. A key component of the SSI’s work is an enduring partnership with the Southside Community Coalition (SCC), which Littlejohn founded, that provides for the development of a business and cultural district along South Salina Street from Colvin Street to West Brighton Avenue. All projects are created to build and sustain community capacity and increase neighborhood cohesiveness.

Littlejohn also organized faculty into a coordinated group, SU Faculty for Community Engagement, to connect the scholarship of faculty with community needs and established the Black History Preservation Team, which promotes access to African American historical materials. She was the executive producer of the documentary “The 15th Ward and Beyond” and created “Our Stories,” a virtual museum that celebrates the history and heritage of black people in Syracuse.

One of those projects, the Eat to Live Food Cooperative, opened on South Salina Street on Oct. 15, providing healthy and affordable food options to a neighborhood that was once classified as a “food desert.” The food co-op was the first commercial construction on the South Side in more than 30 years. The resident member-owners run the cooperative together with an elected board of directors.

Another project, the South Africa Meets the South Side Initiative, uses digital media to connect community members with residents of Alice, South Africa. Littlejohn conceived of this idea and went to the University of Fort Hare in South Africa to facilitate collaboration between their faculty and SU faculty, especially in the College of Law and the School of Information Studies. Videoconferencing offers opportunities for discussion and a venue for enhancing communication among the African American community in Syracuse and abroad.

Littlejohn received a Chancellor’s Citation in 2012 for her accomplishments on the South Side and for bringing students, faculty and the Syracuse community together. Prior to her leadership of the South Side Initiative, Littlejohn was assistant dean for graduate admissions and student services in SU’s School of Social Work (now housed in the Falk College). She holds a bachelor’s degree in social work and two master’s degrees from SU, in social work and public administration. A native of New York City, she was engaged in nearly a decade of human service practice there before moving into the academic arena.