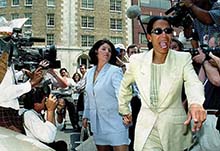 “The Real Olivia Pope” will dissect what it is like to be on speed dial for several high-profile clients as America’s top crisis management expert. Smith will engage in a thought-provoking conversation about the scandals she’s helped to manage.

NABJ-SU is a support group for rising journalists, communicators and media enthusiasts at Syracuse University.