The Warehouse to be Named in Honor of Chancellor Nancy Cantor

Syracuse University Board of Trustees Chairman Richard L. Thompson G’67 announced last night that The Warehouse—SU’s academic and community facility in downtown Syracuse—will be formally named the “The Nancy Cantor Warehouse” in her honor. 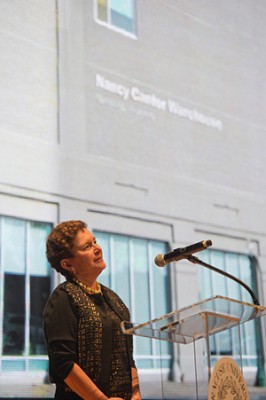 Chancellor Nancy Cantor addresses dinner guests as The Warehouse is officially named in her honor.

The news was announced at a dinner honoring Chancellor Cantor’s legacy, hosted by the Board of Trustees at Goldstein Auditorium in the Schine Student Center.

“Nancy fully recognized that the fortunes of the city and University are tied together. She has shown us that engaging the community in the many ways we are now doing actually makes us better,” says Chairman Thompson. “Nancy showed us how to rethink the boundaries of our campus, of scholarship and of education with a leap that took us across the City of Syracuse. Where others saw an abandoned warehouse, she saw a launching pad. We can think of no better way to commemorate the signature accomplishments of SU under Nancy’s leadership than to formally connect her name to that striking structure.”

Once an imposing, windowless box in which furniture was stored on the edge of downtown, SU’s Warehouse was transformed in 2006 by architect Richard Gluckman ’70, G’71 into a colorfully inviting urban center that has catalyzed further development. Upon completion of its renovation, it served as a temporary home for the SU School of Architecture, whose Slocum Hall home was undergoing a renovation of its own. It also housed design programs of the College of Visual and Performing Arts, which retain a major presence in the building, as well as an art gallery and spaces dedicated to community gatherings and educational programs for Syracuse City School District students.

The impact of The Warehouse renovation on the surrounding Armory Square and Near West Side neighborhoods includes more than $70 million in new capital investments and new office headquarters for such heavyweight neighbors as King & King Architects, engineering firm O’Brien and Gere and WCNY, Central New York’s regional public broadcasting service, and two new hotels. Today, The Warehouse is a hotbed of multidisciplinary scholarship and learning, an architectural centerpiece for Armory Square’s thriving commercial district and a beacon of possibilities for the resurgent Near West Side neighborhood of Syracuse. 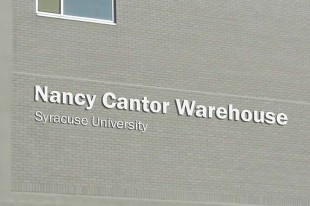 Chancellor Cantor, the University’s 11th chancellor and president, is departing SU after nearly a decade, and will become Chancellor of Rutgers University-Newark in January. Among her many landmark contributions is the legacy of the University’s vision, “Scholarship in Action.” Rooted in a fundamental view that the work of the campus is the work of the world, Cantor promoted the idea that students and faculty should engage in collaborative public and interdisciplinary scholarship that simultaneously meets real-world needs and advances knowledge.

Cantor also led the largest fundraising campaign in the University’s history, generating more than $1 billion for The Campaign for Syracuse University. Nearly three-quarters of the campaign’s funds are designated for academic goals, including expanding deanships and endowed professorships and enhancing interdisciplinary teaching, research, facilities and technologies.

In addition to The Warehouse, key public initiatives defining her tenure and driving opportunities for both engaged and “traditional” scholarship include development of the Connective Corridor, a physical and metaphorical two-way street linking University Hill with key downtown venues; the South Side Initiative and South Side Innovation Center, multifaceted efforts to develop a sustainable business and cultural district on the city’s South Side; a precedent-setting partnership with the Syracuse City School District and national Say Yes to Education Foundation to promote academic success and opportunity for all city schoolchildren; the Syracuse Center of Excellence, a federation of scientists, engineers and industry professionals collaborating on environmental and energy research and development; and the Near Westside Initiative, a nonprofit-led effort to revitalize a long neglected inner-city neighborhood. 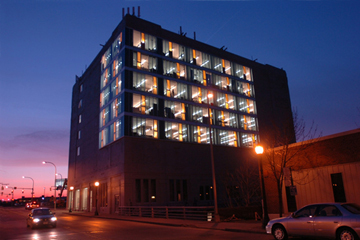 The Nancy Cantor Warehouse is an urban center of academic and community engagement and an architectural centerpiece for Armory Square.

During her tenure, Cantor also lectured and wrote extensively on the role of universities as anchor institutions in their communities, along with other crucial issues in higher education, such as rewarding public scholarship; sustainability; liberal education and the creative campus; the status of women in the academy; and racial justice and diversity. She brought her combined experiences and domains of expertise to bear on her work as co-chair of the American Commonwealth Partnership’s Presidents Council, a member of the Steering Committee of the Anchor Institutions Task Force and co-chair of the Central New York Regional Economic Development Council, a post to which she was appointed by New York Governor Andrew Cuomo.