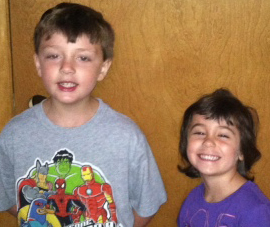 Cindi Comins, associate director of financial aid, and Dan Cutler, director of learning communities, and their families, along with other families from Central and downstate New York, have had their adoptions finalized on NBC’s “Today” Show.  Watch the video here.

November is National Adoption Month, and the show is raising awareness of the issue through a week-long series on “Choosing Adoption.” According to the U.S. government, more than 100,000 foster children were available for adoption in 2012.

The Comins and Cutler-Baxter  families are among a group from the Syracuse area that traveled to New York City by bus on Wednesday morning, including other families, judges, attorneys (including the Comins’ attorney Karen Vedder and Cutler-Baxter family attorney Kevin Harrigan) and court clerks. The adoption finalizations aired during the “Today” Show’s 8 a.m. hour this morning.

Comins and her husband, Dan, of LaFayette, officially adopted 5-year-old Jeffrey and 4-year-old Jada, biological siblings whom they have fostered since the children were 3 and 2 (they had been in foster care since Jada was 10 weeks old). Cindi Comins’ grandmother had done foster care, so it was an option they explored when deciding how to build their family.

The family of four has built strong bonds over the past two years. Comins speaks with joy about the children, who are a kindergartner and preschooler, respectively. “We told them that my tummy was broken, so we had to use their birth mother’s tummy,” she says. “And we told them we are adopting them so that everyone knows we are a family.” 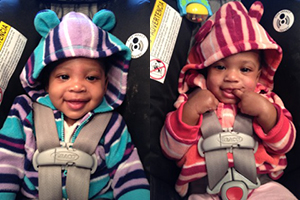 Cutler and his husband, Brian Baxter, have been a couple for 10 years and married for two. “We just couldn’t imagine our life or our family without kids,” says Cutler.

They initially explored foster care, but ultimately decided to work through a private adoption agency in Buffalo. They waited two years, and, on Dec. 21, 2012, while holiday shopping in the mall, received a call that they had been selected by a birth mother in Buffalo. They were in the delivery room when their twin daughters, Emmaline and Gretchen, were born a minute apart on Valentine’s Day, Feb. 14, 2013.

Cutler says he expected two emotions during Thursday’s ceremony –a feeling that “life really won’t be any different” than the past nine months, paired with joy and happiness that the babies are officially their daughters.

While the prevailing sentiment is often that the children are lucky to adopted into stable, loving homes, Cindi Comins has a different take. “We are definitely the lucky ones,” she says.