Raising Money, One Pat on the Head at a Time 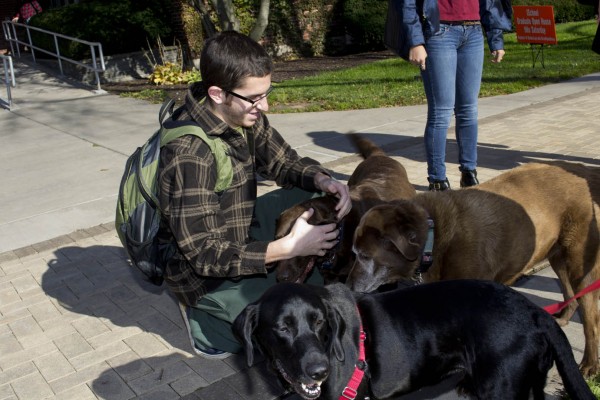 A student takes a few moments to beat the stress of classwork by “Petting Some Pups” on the Quad.

A United Way fundraiser held by the School of Information Studiesl provided students with a unique way to beat the stress of coursework, simply by spending a few minutes with man’s best friend. It’s called “Pet a Pup,” and it helped generate more than $100 to help United Way programs in Central New York.

In return for making a small donation to the United Way, students got the chance to get a little unconditional love from pet dogs brought to campus by their owners who work at the iSchool.

“The iSchool has a long tradition of supporting the United Way fund drive each fall with a bake sale in our building,” according to J.D. Ross, director of communications for the school. “This year, we decided to add another element to our fundraising efforts, and staff and faculty brought their dogs to work for a good cause.”

Their efforts certainly paid off. The iSchool raised nearly $120 for United Way through the “Pet a Pup” initiative, and as Ross puts it, “delighted many students in the process.”

It’s a safe bet the dogs didn’t mind the extra attention either.