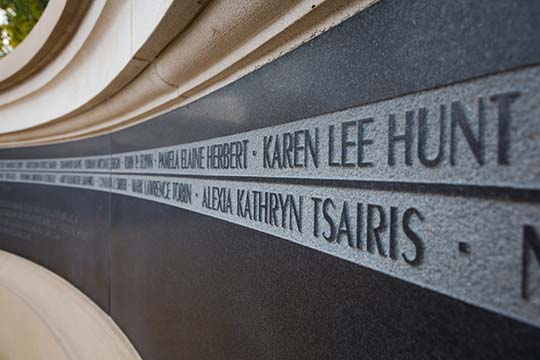 SU’s Remembrance Wall honors students who were killed on Pan Am Flight 103 over Lockerbie, Scotland, on Dec. 21, 1988.

The Newhouse School, in partnership with the Alexia Foundation, will host a presentation and panel discussion on the power of photography to effect social change on Thursday, Nov. 14, at 3:30 p.m. in the Joyce Hergenhan Auditorium in Newhouse 3. The event commemorates the terrorist bombing of Pan Am Flight 103 over Lockerbie, Scotland, on Dec. 21, 1988.

The Alexia Foundation was founded by Peter and Aphrodite Tsairis in memory of their daughter, Alexia Tsairis, one of 35 Syracuse University students who lost their lives aboard Pan Am 103 as they returned home from a semester abroad. At the time of her death, Alexia was a junior photojournalism student in the Newhouse School.

The event will begin with welcoming remarks from Newhouse Dean Lorraine Branham, followed by a presentation by Mike Davis, Newhouse’s Alexia Tsairis Chair for Documentary Photography, examining the Alexia Foundation’s 23 years of supporting photography. He will also preview the trailer for “The Long Night,” a feature-length documentary film by multimedia journalist Tim Matsui that looks at child sex trafficking in Washington State. Matsui’s work is supported by a grant from the Alexia Foundation.

Following Davis’ presentation, Aphrodite Tsairis will moderate a panel discussion with Matsui and other Alexia grantees Louie Palu and Ami Vitale, who will discuss the ways photography can bring about change.

In addition, two photography exhibits will be on display in conjunction with the event: “Images from Matsui, Abir Abdullah and Sara Naomi Lewkowicz”—recent winners in the annual Alexia International Photojournalism Competition—will be installed in the atrium of Newhouse 1 and images from the book “Looking for Lockerbie” by Professor Lawrence Mason will be on display on the second floor of Newhouse 1.