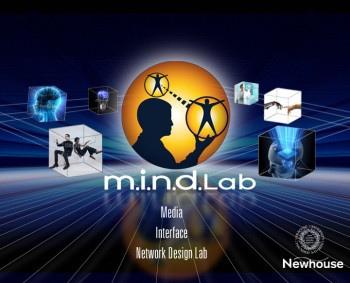 Art meets technology in pioneering ways in a new facility opening Monday, Nov. 4, in the AXA Equitable Tower, located in downtown Syracuse on the Connective Corridor.

The new facility launches with an open house, reception and demos on Nov. 4 from 5-7 p.m. in the first floor AXA lobby area. SU faculty, staff, students and alumni are welcome.

Combining these two creative University offices into a single location on the Connective Corridor was coordinated by Syracuse University’s Office of Community Engagement and Economic Development. Together, they are Syracuse @ Downtown, extending the University’s commitment to connect faculty, student and community expertise to accelerate innovation, technology commercialization and civic entrepreneurship.

Biocca’s work focuses on how mind and media can be coupled to extend human cognition and enhance human performance. He has conducted research on the psychology of presence in virtual environments, spatial cognition and information organization in high-bandwidth and mobile system collaborative augmented reality systems, and adapting interfaces to cognitive styles and sub-cultural differences. The author of “Communication in the Age of Virtual Reality” and a former Silicon Valley entrepreneur, he holds patents on augmented reality technology and participated in the introduction of the first portable computer.

The facility is a unique combination of the arts, new media and scientific human-computer interaction, allowing for research that supports visual and performing arts with virtual environment tools. The SU Arts Engage space will be used for this interactive work, as well as community-accessible workshops, rehearsals and performances that afford the ability to capture full-body interaction within virtual environments using 3D game and visualization design.

“SU Arts Engage embodies the vision of Scholarship in Action by connecting the University with the community, while simultaneously creating a place for interaction through performance art,” adds Carole Brzozowski, University Performing Arts Presenter, who directs SU Arts Engage, which also shares an office with the Janklow Arts Leadership Program on the Connective Corridor on East Jefferson Street.

“The M.I.N.D. Lab network has traditionally partnered with media corporations, new media startups and even created new media patents,” notes Biocca. “It is a logical unit for bridging the University and larger community around new media, visual design and joint media projects.”

M.I.N.D. Lab and its partners have collaborated with new tech startup companies, as well as Samsung, Nokia, 3M, General Motors, Siemens, AT&T and leading news organizations around the globe.

The new facility complements programs at the adjacent Tech Garden.

“These partnerships are bringing advanced high-tech research and design to a burgeoning downtown ‘tech corridor’ anchored by the Tech Garden, AXA Tower and nearby Onondaga Tower,” says Linda Hartsock, who directs the Connective Corridor for SU’s Office of Community Engagement and Economic Development, and who previously directed the Tech Garden. “This new project builds on SU’s downtown commitments at the Tech Garden, including the Student Sandbox and the WISE Women’s Business Center. This cluster of high-tech activity is an anchor for innovation, research and entrepreneurship on the Connective Corridor.”