Near West Side Bridges Featured in New Documentary 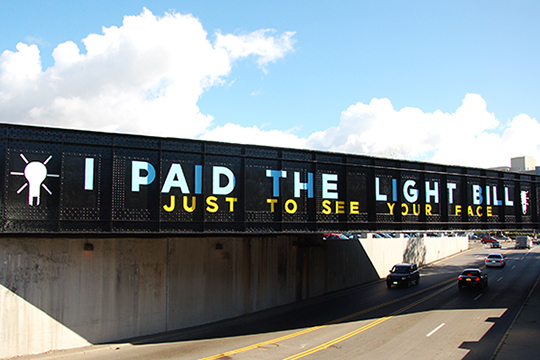 The “A Love Letter to Syracuse” mural is located on the train trestles over West and West Fayette streets in downtown Syracuse.

The recently released documentary film “Sign Painters,” which prominently features the mural “A Love Letter to Syracuse” by artist Steve Powers, will debut in Syracuse on Monday, Nov. 4, at the Redhouse Theater, 201 S. West St. Director Faythe Levine will be among those in attendance.

The film begins at 7:30 p.m. (doors open at 7 p.m.), and will be followed by a general discussion. Admission is $7 for the general public and $5 for students. More information about the film can be found at http://signpaintermovie.blogspot.com.

The film is about the death and rebirth of the art of sign painting in America. The “A Love Letter to Syracuse” mural is located on the train trestles over West and West Fayette streets in downtown Syracuse.

The film screening is being presented in collaboration with the Echo collective and the Near West Side Initiative (NWSI). “We are thrilled to have Faythe Levine join us for the screening of ‘Sign Painters’ here in Syracuse,” says Maarten Jacobs, director of the NWSI. “We are honored that our bridges, the ones that connect Armory Square to the Near West Side, play a prominent role in the film by highlighting the quality of craftsmanship and the artistry involved in Steve Powers’ ‘A Love Letter to Syracuse’ project.”

Levine will participate in the open discussion and question-and-answer session following the film. In addition, local artist and sign painter Cayetano Valenzuela of Black Rabbit Studio will be selling a variety of original hand-painted signs. “As a relative newcomer to sign painting, I have been seeking information, learning from old books and asking questions to other sign painters out there,” he says. “It just isn’t really done anymore. The beauty of a hand-crafted, hand-painted sign is undeniable. You can see the artist’s hand, their intention and attention to the purpose of a hand-painted sign.”