“Still Raining, Still Dreaming” is part of Solomon’s acclaimed “Grand Theft Auto” series, a body of work shot entirely within the virtual world of the Grand Theft Auto video game, and is shown in conjunction with the Everson’s exhibition of the Smithsonian traveling show “The Art of Video Games.”

“Still Raining, Still Dreaming,” with its haunting soundtrack, will also be the debut of UVP’s new sound system at the UVP Everson plaza, a milestone for UVP that will significantly expand programming options for the venue. 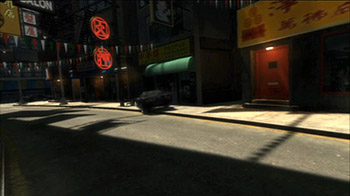 “Still Raining, Still Dreaming” repurposes the virtual world of the controversial “Grand Theft Auto” video game series, with its imperatives to random violence and crime, transforming Liberty City, the fictitious metropolis based on New York City in which the game is set, into a reflective space of stillness: depopulated of players, full of melancholy, longing and moments of compelling poetic beauty.

The Grand Theft Auto works mark an interesting departure for Solomon, a filmmaker best known for his large body of optically printed, densely textured films. However, the works in this series of machinima (a term used to designate videos that are created using real-time computer graphics engines, most commonly video games) achieve similarly haunting effects. Using “cheat codes” and exploiting the “open world” environment of Grand Theft Auto’s game design, Solomon’s lens, often dappled with virtual rain, lingers on the surreal shop fronts, vacant parks and abandoned basements of Liberty City. In this simulacrum, Solomon’s work suggests, the “ghost in the machine” is our own.

Three more films from Solomon’s “Grand Theft Auto” series—”Crossroad” (2005), “Rehearsals for Retirement” (2007), and “Last Days in a Lonely Place” (2008), will be screened as part of “Avant Gaming” in the Everson’s Hosmer auditorium on Nov. 12 (see Avant Gaming below).

He has been a professor of film studies at the University of Colorado at Boulder since 1991, where he met, taught alongside and sometimes collaborated with elder statesman of American avant-garde, film Stan Brakhage.

Solomon’s work has been screened and exhibited widely, including the Rotterdam Film Festival; “Views from the Avant-Garde” at the New York Film Festival; the Whitney Musuem of Art (New York), Anthology Film Archives (New York); the Museum of Modern Art (New York); the Wexner Center for the Arts (Columbus, Ohio); the Gene Siskel Film Center (Chicago); RedCat (Los Angeles); The Pacific Film Archive (Berkeley, Calif.), and Yerba Buena Center for the Arts (San Francisco), among many others.

His work has twice been featured in the Whitney Biennial (2002 and 1995). In 2010, the Corcoran Gallery of Art in Washington, D.C., exhibited a specially commissioned six-channel video installation titled “American Falls” in conjunction with a three-program survey of his work at the National Gallery of Art.

Urban Video Project is pleased to announce “Avant Gaming,” a curated evening of video art made with and about video games on Nov. 12 at 6:30 p.m. in the Everson’s Hosmer Auditorium.

“Avant Gaming” is presented in conjunction with the exhibition of “The Art of Video Games” at the Everson Museum of Art and the exhibition of Phil Solomon’s “Still Raining, Still Dreaming” from his Grand Theft Auto series at UVP Everson.

Chris Stults, associate curator of video and film for the Wexner Center for the Arts, will appear in person to introduce the screening.

The indoor line up will include:

A reception catered by Recess Coffee will follow on the Everson plaza, where Solomon’s “Still Raining, Still Dreaming” will be on display for a special Tuesday night UVP Everson projection. The reception will start at around 7:45 p.m.

Both the screening and the reception are free and open to the public.