Indian filmmaker Onir to Attend Screening of his Film “I Am” 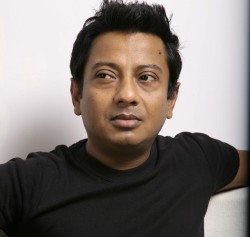 Syracuse University’s South Asia Center, the Newhouse School’s Department of Television, Radio and Film (TRF) and the College of Arts and Sciences’ LGBT Studies program will host a screening of the feature film “I Am” on Monday, Nov. 4, at 6:30 p.m. in the Joyce Hergenhan Auditorium in Newhouse 3. Indie filmmaker Onir will attend the event. Follow on Twitter at #IAmOnirSU.

An innovative entrepreneur, Onir writes, directs, produces and edits his own films. He also uses social media to crowdfund his films and build a fan base. The only openly gay filmmaker in India, Onir’s Twitter bio proudly proclaims: “I AM GAY and refuse to be INVISIBLE.”

“I am delighted to finally have the opportunity to host Onir at Syracuse University,” says Tula Goenka, co-director of the South Asia Center and an associate professor in TRF. “He is the undisputable voice of indie filmmakers in India. He can rightly be called a film activist.”

Goenka, who runs the Bollywood Snapshots course through SU Abroad, says her 2012 students had the opportunity to meet Onir in Mumbai. His film was previously screened at SU at the 2011 Human Rights Film Festival.

“I Am” (110 mins, India, Hindi with English subtitles, 2010), the winner of two prestigious Indian National Awards, weaves together the tumultuous lives of four characters struggling with their identity and paints a compelling portrait of contemporary Indian society as it grapples with the vital issues of religious conflict, homophobia, sexual abuse and single motherhood. Shot in four different cities across India, it is a fusion of stories based on true events, where the protagonists share a desire to regain their lives and to regain an identity that has been taken away from them. It stars Juhi Chawla, Manisha Koirala, Rahul Bose, Nandita Das, Sanjay Suri and Purab Kohli.

The screening is free and open to the public. For more information, contact Goenka at 315-443-3376 or tgoenka@syr.edu.