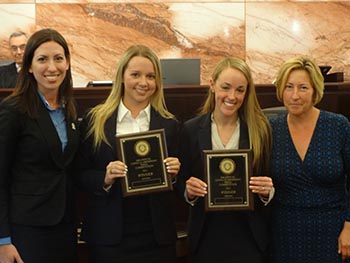 Samantha Robbins and Gracie Wright are the winners of the 36th Annual Lionel O. Grossman Trial Competition, which was held on Oct. 24 at the James M. Hanley Federal Building, according to the Syracuse University College of Law. Finalists included Angela Reed and Mark O’Brien. O’Brien was also the winner of the esteemed Frank H. Armani Advocacy Award as the best advocate.

This year’s competition involved a complete trial based on a thought-provoking civil fact pattern of negligence and products liability. The competition included both second- and third-year law students and is designed to test their skills in evidence, courtroom etiquette and knowledge of trial practice.

The competition’s namesake, Lionel O. Grossman L’16, died in October 1991. At that time, he was one of the College of Law’s oldest living alumni. His professional achievements, community service and commitment to excellence personified the ideals of the legal profession. For more than 30 years, Grossman devoted himself to the fight against cerebral palsy. In 1946, he founded the Cerebral Palsy Center and became the president of the United Cerebral Palsy Association of Syracuse and New York State. He also served as co-counsel to the National Cerebral Palsy Legislative Committee.