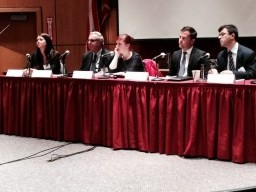 Helfman was the sole academic participant in a panel titled “Disputes and the Regime of Islands and Rocks Under the Law of the United Nations Convention on the Law of the Sea.”

Her presentation focused on the legal and strategic implications of the dispute over maritime and territorial sovereignty in the South China Sea. China claims sovereignty over approximately 80 percent of the sea, which is encircled by Brunei, the Philippines, Taiwan and Vietnam. More than half of the world’s commercial tonnage travels through the sea each year, and it is estimated to hold the fourth largest deposit of petrochemicals in the world. It is a major geopolitical flashpoint.

The other panelists included:

The discussion was moderated by Steven Hill, deputy legal advisor to the U.S. Mission to the United Nations, and chaired by Christina Hioureias of Chadbourne & Parke, LLP.