“Scorched” is an epic, international mystery that has captivated and stunned audiences around the globe. After their mother’s death, twins Janine and Simon, guided by letters their mother has left each, travel to the Middle East to untangle family roots entwined in a war-ravaged past. A play of raw power and poetic resonance, the Syracuse Stage production marks the return of director Marcela Lorca (“Caroline, or Change”). 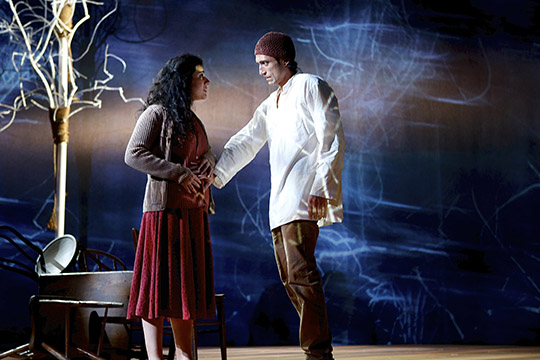 “Scorched” performs  through Nov. 10 in the Archbold Theatre at the Syracuse Stage/Drama Complex. It is recommended for mature audiences due to adult language and violent situations.

Pre- and post-show events include the Opening Night Party (Oct. 25 with live music by Freres Jumeaux—brothers Eric and Anthony playing pop song covers on cello and violin), Happy Hour (Oct. 31 with half price drinks and complimentary snacks), an Actor Talkback (following the 7 p.m. show on Nov. 3), Wednesday @ 1 Lecture (“Creating Complex Stories about the Arab World” with Professor Carol Fadda-Conrey), and Prologues (moderated discussions with actors from the show on Oct. 27, Nov. 2 and Nov. 7). Visit Syracuse Stage Events for more info.

Additionally, two discussions are planned during the run of “Scorched.” A panel discussion called “Listening to Scorched: Women, War and Resistance” will take place on Oct. 26 at 6 p.m. in the Storch Theatre at the Syracuse Stage/Drama Complex. The discussion will be moderated by Fadda-Conrey, joined by Professors Dana Olwan (SU), Neelika Jayawardane (SUNY Oswego) and Aisha Musa (Colgate University). This event is sponsored by the SU Humanities Center in The College of Arts and Sciences, organizer of the 2013 Syracuse Symposium: Listening.

A second discussion will feature David Harrington of Kronos Quartet and Alex Ross from The New Yorker, at 1:15 p.m. on Saturday, Nov. 2, in the Sutton Pavilion at the Syracuse Stage/Drama Complex. Kronos is the only recipient of both the Polar Music Prize and the Avery Fisher Prize, two of the most prestigious awards given to musicians. In Scorched, selections from the Quartet’s recordings will serve as transitional music, made possible with support from SU Arts Engage.

In writing Scorched, playwright Wajdi Mouawad drew inspiration from personal experiences as well as Greek tragedies and Kafka. Nawal, the central character, was partly inspired by a woman the playwright had met, who had attempted to assassinate the commander of the South Lebanon Army in 1988 and was interned in the army’s notorious El-Khiam prison for 10 years (CBCNews).

“For 10 years, she heard the crying and pain of the tortured. To try not to become mad, she began to sing. The other people in the jail, who heard this woman but never saw her, called her ‘The Woman Who Sings.’ She gave them hope and courage to survive,” Mouawad explained. (CBCNews)

In revealing Nawal’s past, time and location in “Scorched” are often blurred and interchangeable, much like memories. The “present time” is not defined but resembles the 21st century with memories of times like the latter half of the 20th century. Locations are not defined, but twins Janine and Simon live in a city and country very much like Montreal, Canada, and their mother, Nawal, came from a country very much like Lebanon in the Middle East. (Tarragon Theatre)

“Scorched” was originally written in French under the title “Incendies,” which was adapted into a film that received an Academy Award nomination in 2011.