A film by students in the Newhouse School’s Department of Television, Radio and Film (TRF) was chosen as an official selection to the 2013 Golden Door International Film Festival, held Oct. 10-13 in Jersey City, N.J.

The film, titled “The Heartbreaker,” was part of a multi-class collaboration between students in “Sight, Sound and Motion” (TRF 205), taught by TRF Chair and Professor Michael Schoonmaker, and “Screenwriting” (TRF 211), taught by Assistant Professor Keith Giglio. 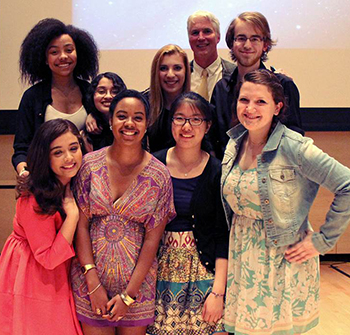 Bailey, who directed the film, says the biggest challenge was learning how to work with children. “Having never directed kids before, it was an ambitious undertaking to start our first day of production with the classroom scene,” she says. “Getting the kids settled into the classroom was tough enough to begin with, but keeping everyone entertained for hours on a cold Saturday morning was even tougher. That day definitely set the bar for the rest of the production.”

Yet Bailey says the production team’s experience with the children was also the most rewarding part of working on the film. “I believe it helped strengthen our team-working skills and built up our confidence level. Many of our child actors were interested in learning more about film production, so working with them not only benefited us, but also inspired them to explore a newfound passion.”

Bailey, a sophomore who hopes to pursue a career producing and directing for film and television, was the one who delivered the news to the production team that “The Heartbreaker” had been selected for the Golden Door International Film Festival. “After the long days and late nights put into producing ‘The Heartbreaker,’ I was overwhelmed with excitement and a great sense of accomplishment,” she says. “I speak for the whole team when I say that seeing the film on screen felt very rewarding.”

“This is a great honor,” Schoonmaker says of the film’s selection. “It demonstrates the natural and formidable talent we are drawing to the Newhouse School. I can’t wait to see what kind of work these students do at the advanced level!

“This partnership with our screenwriting classes has allowed our production students to focus on production,” he continues. “‘The Heartbreaker’ team not only focused on production, they also involved themselves with children and pets—two of the most challenging subjects there are in production—and they nailed it!”

Says Giglio: “From my years in Hollywood, I know it’s a small miracle to get a movie made, let alone a good one. ‘The Heartbreaker’ was our first script-to-screen project that emulated the Hollywood collaborative process—from the blank page to development meetings to production to the editing room, students embraced the studio development process and succeeded greatly. I look forward to many more great films by many more great students.”