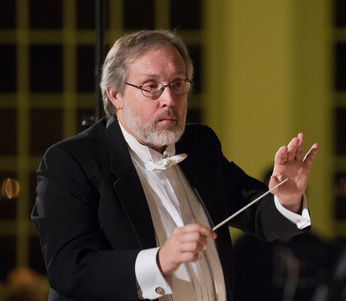 The Syracuse University Brass Ensemble (SUBE), directed by James T. Spencer, will launch its 2013-14 season with a concert in Lee Center, north of Rome, N.Y. The group is housed in SU’s College of Arts and Sciences.

“We hope this performance will be the first of many in Lee Center,” says Spencer, who also writes for and plays with SUBE. “We will present a variety of traditional and contemporary selections that everybody will love.”

Spencer also teaches in the College, where he serves as a Meredith Professor, professor of chemistry and associate dean for science, mathematics and research.

The concert will cover a lot of thematic ground—from classical (Tchaikovsky’s “Swan Lake Suite” and Glinka’s “Overture to Russlan and Ludmilla”), to pops (music from the James Bond and “Pirates of the Caribbean” series), to holiday (“Carol of the Bells”).

It will also feature trumpeter Craig Elwood G’90 and French hornist Claire Tuxill McKenney as soloists in the “Huron Carol” and in Franz Joseph Strauss’ “Nocturno,” respectively. Both soloists are veterans of the group.

Scott Rutledge, another member of SUBE’s trumpet section, helped organize the concert. “It is exciting to be able to bring SUBE to Lee Center. The group is as good as any I have ever been a part of, and I know the audience is in for a rare treat,” says the acclaimed performer, teacher and clinician. “It’s going to be a memorable evening.”

Rutledge has been St. Joseph’s music director since 1984.

SUBE features professional, amateur and student musicians from throughout Central New York. The award-winning group presents several dozen concerts a year, including “Holidays at Hendricks,” which is broadcast every winter on WCNY TV and radio throughout New York state and southern Canada. Distinguished composers from whom SUBE has commissioned music include Robert Ward, Arthur Frackenpohl, and Joseph Downing. DVDs of the ensemble are available at the SU Bookstore. More information is at subrass.com.