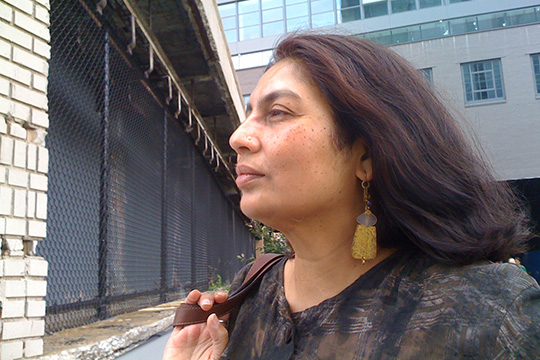 Professor Chandra Talpade Mohanty was a graduate student at the University of Illinois in 1983 when she and her colleague, Ann Russo, developed the idea for an international women’s conference on feminist perspectives from the Global South and North.

She had just taken her first feminist theory class and noticed the burst of new publications addressing the concerns of racially diverse women in the United States.

“Suddenly there was a powerful new voice of women of color addressing key feminist issues,” says Mohanty, a professor of women’s and gender studies in The College of Arts and Sciences. “We wanted to bring together all the people that we had read about who were doing this amazing work challenging feminism from the inside.”

Some laughed at her and her fellow students’ efforts to raise money. Many told her such a conference couldn’t be done.

“Common Differences: Third World Women and Feminist Perspectives” convened women from the Third World (now referred to as the Global South)—Africa, Latin America, Asia and the Middle East—with women of color and white women from the United States to discuss their shared and different feminist struggles, especially in relation to colonization, capitalism and racism.

“It was one of the very first such conferences in this country where women from the Third World came together to talk about decolonization, nationalism and feminism in a public arena with women who were talking about racism, class prejudice and gender justice,” says Mohanty, who is also a professor of sociology and cultural foundations of education.

“Because of these dialogues, I learned very early in my scholarly life that the best thinking and strategizing emerges through collaborations with diverse communities of people, and I have worked to build these radical intellectual neighborhoods in the service of social justice,” she says. “’Common Differences’ was the beginning of my intellectual journey in the company of feminists of color.”

It was also a pivotal moment in Mohanty’s academic career.

“I became completely convinced that there is a lot of work to be done analyzing questions of gender justice and building solidarity across borders—and this is the work that excites me,” says Mohanty, who came to the United States from India as a graduate student in education. “When I got my Ph.D., I applied for women’s studies jobs because I knew that early childhood education would no longer contain me.” 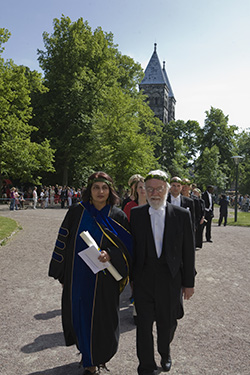 Chandra Mohanty in the procession to receive an honorary doctorate at Lund University in Sweden.

Her new path led her into positions teaching at Hamilton College, the Union Institute Graduate School and Oberlin College. In 2004, she joined SU’s Department of Women’s and Gender’s Studies. Through all of her positions, she has explored the diverse implications of contemporary anti-capitalist, transnational feminism. Her insights have drawn international recognition with invitations to speak at conferences and institutions across the United States and in the Middle East, Europe, South America and Asia.

Mohanty, who is a Dean’s Professor of the Humanities, was also honored with an honorary doctor of humanities from Wooster College in Ohio in 2012 and an honorary doctorate from the faculty of social sciences at Lund University in Sweden in 2008.

Most recently, she was named a Distinguished Professor of Women’s and Gender Studies at Syracuse University, one of the highest academic honors given to a faculty member.

“I see it as an honor that is more than individual recognition—it recognizes the significance of a key field of study: anti-racist, transnational feminism,” Mohanty says. “I’m very interested in looking at issues that women in the Global South deal with and how those issues connect with the concerns of women in this country and in the West in general.”

Many of the issues that women face around the world are the same—fair wages, poverty, access to health care, violence against women, reproductive rights. “There are issues we have in common, but the way we understand the impact of those issues in different geopolitical situations is completely different,” she says.

Her current research and questions involve what it means to engage in radical feminist social justice projects in educational institutions and society as a whole—and how to maintain that commitment to equity when there are many communities of women who are disenfranchised: poor women, women of color and women in occupied territories, in prisons and in conflict zones.

“My experience of the ‘Common Differences’ conference was instructive in that as a woman of color from the Global South, it was really important for me to understand the U.S. landscape of feminism from the standpoint of U.S. women of color. So while the politics of class and capitalism and decolonization provided a common focus, developing an anti-racist standpoint was key in forging solidarities with U.S. women of color,” Mohanty says.

Similarly, her collaborations—scholarly, pedagogical and activist—have always been with U.S. women of color with actively anti-nationalist, anti-imperialist feminist commitments.

“There are abundant opportunities for solidarities between U.S. women of color and women of color from the Global South—but the success of these collaborations and alliances depends on a deep commitment to understanding the differences between our histories and experiences,” Mohanty says.

Many educational institutions, for instance, are committed to issues surrounding diversity, especially in terms of faculty representation.

“SU has made amazing strides during Chancellor Nancy Cantor’s 10 years here,” Mohanty says. “The more faculty you have that are brown and black, and that are women, the more ‘diverse’ you are as an institution. But diversity has to be about more than representation.”

Mohanty wants to go deeper into questions of equity and justice—to look beyond the numbers and commit to social justice and institutional transformation. “Is multiculturalism just about representation of people? Or is it actually about changing our outlook based on the differences among us and the histories and experiences that each of us brings into the institution? That requires cultural shifts that are not that easy to make,” she says. 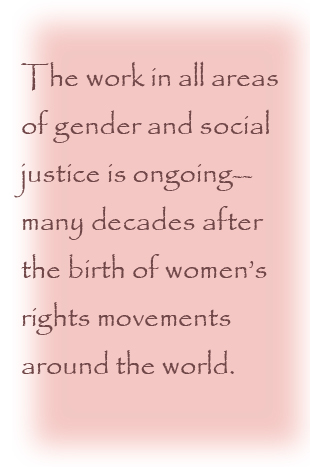 To help create dialogue and a cultural shift in thinking, Mohanty was part of a collective, organizing the Democratizing Knowledge (DK) Project: Developing Literacies, Building Communities, Seeding Change, a Chancellor’s Leadership Project launched in 2009, which looks at transforming thinking about curriculum, democratizing access to knowledge, and changing policies in such areas as access, hiring and research.

The work in all areas of gender and social justice is ongoing—many decades after the birth of women’s rights movements around the world. Important strides, such as laws against sexual harassment and pay equity have been made, but such issues as reproductive rights, violence against women and equal access and policies in employment remain ongoing struggles.

“We may have changed laws, but that doesn’t necessarily mean we have changed the ways we think about gender and racial justice,” she says.

Mohanty, who teaches a graduate seminar in the “Practice of Transnational Feminism” this semester, brings that passion to her students.

“I’m trying to teach people about the politics of knowledge, the stakes in the kind of work we do—and to ask if the work we’re doing in fact addresses the important questions we have,” she says.

Mohanty feels the recent honor as Distinguished Professor represents all the work of teaching and research that has in many ways been collective work. “It’s because I work in community that I’m able to think and write and teach the way I do,” Mohanty says.