A Delicate Web of Remembrance 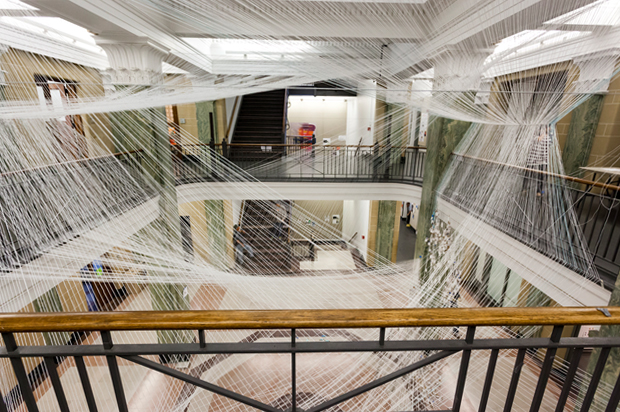 In Slocum Hall, School of Architecture students installed an intricate, delicate remembrance for the victims of Pan Am Flight 103. Photo by Jamie Young.

School of Architecture students and faculty have conceived and constructed a delicate web of dozens of lines of string blended into a structured, yet fragile, design honoring those lost 25 years ago in the bombing of Pan Am 103.

Composed of more than 70,000 linear feet of white string suspended as folds across the central space of the atrium, the installation depicts the transition into the afterlife, remembrance and the ability of architecture to act as an agent of change through collaboration and physical expression.

A closing reception will be held on Friday, Oct. 18, at 5 p.m. in the Slocum Hall atrium. 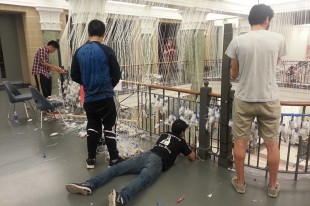 Students at work on the installation in Slocum Hall. School of Architecture students and faculty conceived and constructed this delicate web of dozens of lines of string blended into a structured, yet fragile, design.

“We wanted the design to portray the ascent to heaven—a physical metaphor of a spiral to the other realm, whichever one the interpreter may believe in—using four twisting planes made of string,” Camastra says. “We wanted to inhabit and alter the space but allow someone to walk through and observe from multiple vantage points.”

From some views, the strings seem as if they overlap and weave, creating a dense form, while other views provide a more open tunneling perspective, the students say. Thirty-five strings are interwoven discontinuously to represent the Syracuse University students on board Pan Am Flight 103.

The textured, complex weave was created as part of Remembrance Week, which is held every year on campus to remember the tragedy. The weeklong series of events honors the 270 people—including 35 students studying abroad through Syracuse University—who lost their lives in the terrorist bombing of Pan Am Flight 103 over Lockerbie, Scotland, on Dec. 21, 1988. 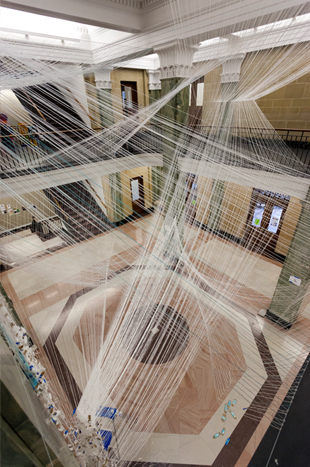 Composed of more than 70,000 linear feet of white string suspended across the central space of the atrium, the Pan Am Flight 103 installation depicts transition into the afterlife, remembrance and the ability of architecture to act as an agent of change through collaboration and physical expression. Photo by Jamie Young.

“As architecture students and faculty, we really appreciated the enduring theme of Remembrance Week, ‘Look Back, Act Forward,’ because this is what we are best at—acting and generating new things to bring awareness to the public,” Larsen says. “The students were very aware of the impact it would not only have on Remembrance Week but also on the school because of its presence in the most public area of the building.”

While designing the project, team members had to figure out how they would go from conceptual digital model to the actual physical life-size fabrication.

“Not only did we have to design the object itself, but we also worked diligently to design its process as well,” Kim says. “It was difficult to predict the problems that would occur while working with a little more than 1,000 strands of string that would expand and stretch over 65 feet each.”

One of the design challenges was to figure out how to make a system that would hold the strings as unobtrusively as possible. They decided on a wire cable system.

“The gauge of the wire was thin enough so that the wires can take a minimal presence in the installation while still supporting the weight and pull of the string,” Anderson-Nelson says. “The goal was also to hide the less aesthetic parts, like the wire attachments and tightening system (or turnbuckle); we did this by placing these systems behind the columns and in corners so that they were out of sight.”

Students also had to figure out how to move about the towering atrium that in some places was difficult to reach by ladder. They solved the problem by fastening the strings to the top wire before putting it up and working from the top down.

Another challenge was preventing tangling, which caused several delays as only one student at a time could work on patiently unraveling the strings.

The project took about a week to complete, so many students became involved over the course of the week as they saw the space transformed and wanted to participate. “This was an opportunity for them to act in the future but continuously be reminded of what the installation represented,” Larsen says. 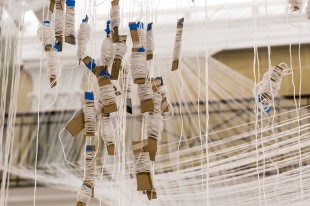 The installation in Slocum Hall on the SU campus took about a week to complete. Photo by Jamie Young.

The 35 blue strands are an integral part of the design and what each represents, the students say. Some flow with each plane of the apparatus while others delineate and tie off to a common end point to signify that not all these students attended SU—some were taking part in a study abroad program through SU. “Not all of them were grounded here, but they are still with us in the end sharing the same bonds we have for our fellow students who went here,” Kim says.