Organist Aaron Tan, winner of the 2013 Arthur Poister Scholarship Competition in Organ Playing, will present an organ recital on Wednesday, Oct. 30, at 8 p.m. on the historic Holtkamp organ in the Rose and Jules R. Setnor Auditorium, Crouse College. The recital is free and open to the public. 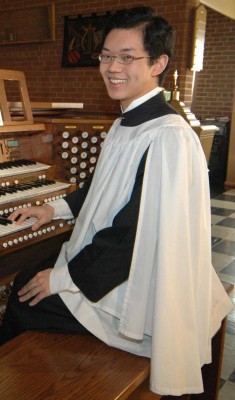 Tan will perform works by Francis Jackson, Edward Bairstow, J.S. Bach, Joseph Bonnet and Max Reger. His performance is part of his first-prize award for winning the Poister Scholarship Competition, which is coordinated by the Syracuse chapter of the American Guild of Organists (AGO) and honors Poister (1898-1980), a renowned organist and Syracuse University professor emeritus. Organists under age 30 are eligible to compete.

At age 27, Tan is a passionate organist, engineer and pianist. His musical upbringing was primarily on the piano and later on the violin. Receiving his associate (ARCT) diploma in piano performance from the Royal Conservatory of Music in Toronto, Canada, at the age of 12, he went on to earn his licentiate and fellowship diplomas in piano performance from Trinity College of Music in London at ages 13 and 15, respectively. When he was 18, he also completed his ARCT diploma in violin performance.

In 2004, under the auspices of the Barwell Scholarship (awarded to pianists interested in learning the organ), Tan began organ studies with John Tuttle while concurrently entering as a freshman in engineering science at the University of Toronto. Since then, he has gone on to complete both associate (ARCCO) and fellowship diplomas in organ from the Royal Canadian College of Organists (RCCO). In addition, he has also won numerous noteworthy contests and scholarships, including the Toronto RCCO Young Organists Competition, the Osborne Organ Competition of the Summer Institute of Church Music (Ontario), the RCCO’s National Organ Playing Competition, the Charlotte Hoyt Bagnall Scholarship for Church Musicians, the Lilian Forsyth Scholarship and the West Chester University Organ Competition.

Tan moved to Ann Arbor, Mich., in 2007 to pursue a Ph.D. in materials science and engineering at the University of Michigan. During this time, he studied the organ with Marilyn Mason, university organist. He graduated in 2012 and began work as a postdoctoral researcher in the University of Michigan’s Laboratory for Complex Materials Research. His current work focuses on developing techniques for measuring localized dielectric and thermal properties of polymer thin films.

The recital is sponsored by the Rose, Jules R. and Stanford S. Setnor School of Music in the College of Visual and Performing Arts and the Syracuse chapter of the AGO. Free and accessible parking is available in the Q1 lot. Additional parking is available in the Irving Garage. Campus parking availability is subject to change; call 315-443-2191 for current information or for more information about the concert.