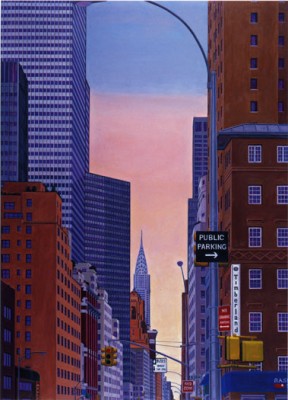 “Between the Spaces” (1995) by Cecile Gray Bazelon

The Sue & Leon Genet Gallery in the College of Visual and Performing Arts (VPA) will present an exhibition of work by distinguished artist and alumna Cecile Gray Bazelon ’49.

“Between the Spaces: Works by Cecile Gray Bazelon” will be on view Oct. 29-Nov. 26 with an opening reception on Wednesday, Oct. 30, from 5:30-7 p.m. The exhibition and reception are free and open to the public.

Born in Cleveland, Bazelon earned a bachelor of fine arts degree from VPA and won the graduate fellowship in painting. After she moved to New York City, she worked out of her apartment for several years, confining herself largely to woodcuts—mainly portraits of friends and animals. During this period she was both student and teacher to herself.

Bazelon began showing at the prestigious Robert Schoelkopf Gallery in Manhattan after spending a summer on a fellowship with her husband at Yaddo, the artists’ colony in Saratoga Springs, N.Y. After three solo shows there, she exhibited at the Abe Sachs Gallery in Manhattan, which was subsequently purchased by Katharina Rich Perlow, with whom Bazelon showed until 1996. Her last solo show was at the Ezair Gallery in Manhattan in 2008.

Bazelon’s work has been described as surreal, Precisionist and hard-edged, as well as elegant and dislocating. A defining aesthetic in her paintings is the stylistic manipulation of space; she often uses wide-angle perspective to delineate her many images of the New York skyline, resulting in a striking series of conceptual viewpoints. Learn more at http://cecilegraybazelon.com.

“Between the Spaces” was developed by graduate students enrolled in the “Advanced Curatorship” course in the graduate museum studies program in VPA’s Department of Design, under the guidance of Professor Edward A. Aiken. The students also acted as associate curators.

The Genet Gallery is located in Room 106 of The Warehouse, 350 W. Fayette St., Syracuse. Gallery hours are Monday-Friday, 1-5 p.m. For more information, contact Aiken at eaaiken@syr.edu.