Idrak Abbasov, an independent journalist from Azerbaijan, is the recipient of the 2013 Tully Award for Free Speech. The award, presented annually by the Newhouse School‘s Tully Center for Free Speech, is given to a journalist who has faced a significant free speech threat. 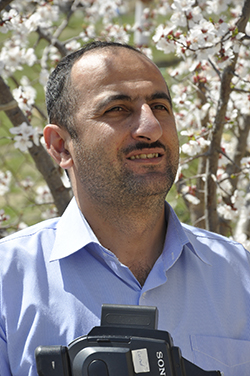 An award ceremony will be held on Thursday, Oct. 24, at 7 p.m. in the Joyce Hergenhan Auditorium in Newhouse 3. Follow on Twitter at #TullyAward.

“We are pleased and excited to welcome and honor Idrak and learn about his stories and reporting,” says Roy Gutterman, director of the Tully Center. “Our students and community need to hear his stories and understand that journalists in far off places risk their lives every day to do journalism. It will be an eye-opening event.”

Abbasov is a contributor to the Azerbaijani newspaper Bizim Yol, the Russian information agency Regnum and the British Institute for War and Peace Reporting.

He has endured several challenges to his journalism. On April 18, 2012, while filming protests against the state oil company, he was attacked by what he believed were oil company security forces and the police, but the Azerbaijani president denies the allegations. The attack left him with two broken ribs, a concussion, severe damage to one eye and damage to his internal organs. His brother was also injured during the attack and his father’s home was invaded and damaged. Despite the attack, he has remained dedicated to his job, and continued to work even as he was recovering from his injuries.

Abbasov has received several awards for his work, including a 2012 Index on Censorship Guardian Journalism Award. His case drew the attention of the European Parliament, Human Rights Watch and Amnesty International, all of whom have urged the Azerbaijani government to stop suppressing human rights.

Endowed by the late Joan Tully ’69, the Newhouse School’s Tully Center educates students and the public about the important value of free speech through education, resources and research. As part of her bequest, Tully asked that an award be given to honor a journalist who has shown courage in facing a free speech threat. The awardee visits SU for several days to be honored at an award ceremony, accept a cash award and visit classes across campus.

Nominees for this year’s award were:

This year’s nominating panel included Delphine Halgand, director of Reporters Without Borders; Ken Paulson, president and CEO of the First Amendment Center; and Marguerite Sullivan, director of the Center for International Media Assistance at the National Endowment for Democracy.