A free concert featuring the Free Design and the iBand from Syracuse University to benefit the ALS Association Upstate New York Chapter is scheduled for Saturday, Oct. 12, at May Memorial Unitarian Universalist Society, 3800 E. Genesee St., Syracuse. The concert is open to the public and begins at 4 pm.

The Free Design was a popular band in the late 1960s and early 1970s, consisting of four members of the Dedrick family from the Buffalo area. They are dedicating their participation in the concert in memory of their sister, Stefanie, who died from ALS.

Their first single, “Kites are Fun,” reached the charts in 1967. The band released seven albums and appeared on “The Tonight Show with Johnny Carson,” the “Mike Douglas Show” and other TV and radio programs. Their music has been heard recently on Toyota commercials and TV shows such as “Weeds” and “Gilmore Girls.” The band has reunited with old and new members and performed at the recent ALS Upstate NY Walk to Defeat ALS in Syracuse. 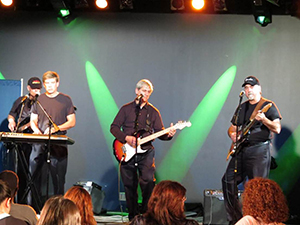 The iBand is the house band for the School of Information Studies. It specializes in classic rock from the 1960s through the 1990s, as well as performing original tunes. The iBand plays at campus parties, community events and benefit concerts around the Syracuse area.

Monies raised from raffles, to include fpur SU basketball game tickets, a complete date night package and more, will be donated to the ALS Association Upstate New York Chapter. The chapter is a not-for-profit organization dedicated to finding the cause of and cure for amyotrophic lateral sclerosis (ALS), a devastating and fatal neuromuscular disease that is also known as Lou Gehrig’s Disease.

Unless a cure is found, more than 30,000 Americans living today will die from ALS. The financial cost to families of persons with ALS can be up to $250,000 per year, depleting savings of patients and their relatives. The ALS Association is funded solely by donations, and the chapter offers all services to people with Lou Gehrig’s Disease and their families free of charge.

The ALS Association is the only national nonprofit organization fighting Lou Gehrig’s Disease on every front. By leading the way in global research, providing assistance for people with ALS through a nationwide network of chapters, coordinating multidisciplinary care through certified clinical care centers and fostering government partnerships, the association builds hope and enhances quality of life while aggressively searching for new treatments and a cure. For more information about the ALS Association, Upstate New York Chapter, visit  http://www.alsaupstateny.org.