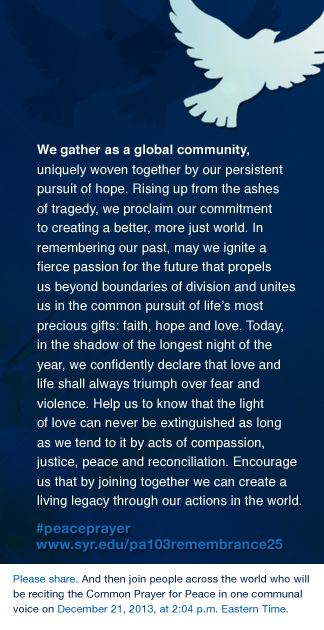 A message of hope has begun its journey across the globe. How many eyes see it and how many mouths speak it likely will never be known. But its purpose is clear: to instill a sense of resolve from sorrowful acts of the past to help ensure they never occur again.

The Common Prayer for Peace has been placed in circulation via social media (#peaceprayer) and email, and can also be found on the Web. Simple instructions accompany the prayer, asking those who receive it to share it widely and then, wherever they are on the eve of the winter solstice/summer solstice in December 2013, join together as one to recite the prayer aloud and convey its compelling message in one communal voice.

The 142-word passage draws upon the shared experience of Lockerbie, Scotland, and Syracuse University, two communities previously unknown to one another that became irrevocably bound on the dark night of Dec. 21, 1988.

At 7:03 p.m. local time that day, a Boeing 747 named Clipper Maid of the Seas was leveling off at 31,000 feet, just north of the England-Scotland border, when an explosive device in the forward cargo hold detonated and blew a basketball-sized hole in the fuselage. Over the next several minutes, the plane broke apart and plummeted to the ground. The terrorist bombing of Pan Am Flight 103 killed 270 people, including 11 residents of the town of Lockerbie, where the wreckage came to ground. Among the jetliner’s passengers were 35 Syracuse University students returning from a fall semester studying abroad.

After a three-year joint investigation by Scottish and U.S. authorities, two Libyan nationals were implicated in the bombing. In 1999, following eight years of United Nations sanctions and negotiations, the pair was turned over by the Libyan government to face trial at Camp Zeist in the Netherlands. One, a Libyan intelligence officer, was convicted of murder.

The Common Prayer was composed by the Rev. Tiffany Steinwert, dean of Syracuse University’s Hendricks Chapel, and the Rev. Sandy Stoddart, minister of the Lockerbie (Dryfesdale) Church of Scotland. “Sandy and I decided to co-author the prayer as a symbol of the unity and friendship that has sprung from the tragedy over the past 25 years,” Steinwert says. “If anything good can be said to come from this act of terror, it has been the deep bonds of friendship that have grown across the pond, connecting the hearts of Syracuse and Lockerbie as one.”

While the origin of the Common Prayer is rooted in the tragedy of Pan Am 103—and this year’s commemoration of the 25th anniversary of the terrorist bombing—the prayer is intended to resonate with people throughout the world who have been impacted by terrorism: the sarin gas attack on the Tokyo subway in 1995; 9/11; the London Underground bombings of 2005, this September’s terrorist attack on a Nairobi mall; multiple car bombings and suicide bombings in Africa, Asia, the Middle East and Northern Ireland; and thousands more acts that have left so many killed, injured,  and emotionally and physically scarred. To them, the prayer is dedicated. From them, and from others who believe in its message, comes the resolve to work toward a better future in which that sorrow has no place.