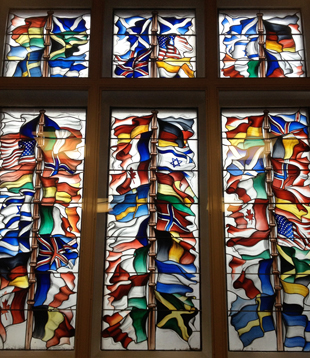 This stained glass mural in the Lockerbie Town Hall represents the 32 nationalities of victims aboard Pan Am Flight 103.

After being named a 2013-14 Remembrance Scholar in late April, I was overwhelmed by SU faculty and friends who reached out to congratulate me on the achievement. I was even more touched, though, by the effort that SU faculty made to coordinate a visit for me to Lockerbie toward the end of my semester abroad in Germany.

Claire Dorrance, a 2012-13 Lockerbie Scholar, connected with me and offered to host my parents, who were visiting at the time, and myself for a day in Lockerbie. The perspective I thought I had on the Pan Am Flight 103 bombing completely changed as my parents and I drove into the quaint but bustling town.

Claire, her father Colin Dorrance, who was the first off-duty police officer on the scene of the disaster, and Graham Herbert, the rector of Lockerbie Academy, greeted us upon our arrival. By merely stepping out of the car, we were only steps away from the town hall. The small size of Lockerbie is a lot of its charm. As we climbed up the staircase of the town hall, Mr. Herbert and the Dorrances were greeted with ‘hellos’ and ‘how ya doing’s.’ Everyone is everyone’s neighbor in Lockerbie, Scotland.

Inside the town hall is a beautiful stained glass window, composed solely of flags representing the 32 different nationalities of the victims aboard Pan Am 103. Victims hailed from Israel, Canada, Jamaica and everywhere in between. The Lockerbie Town Hall was used the night of the disaster and for many weeks following as an information center for residents. The building, now back to its original use, still symbolizes that sense of community to Lockerbie residents.

Afterward, we drove to the Lockerbie Garden of Remembrance, just a few minutes from the heart of the town. The garden, dedicated to the victims of Pan Am Flight 103, is lush green with growing trees and blooming flowers. But its beauty can’t hide the sorrow planted in its roots. Once we entered and began reading memorials and signs throughout the garden, the mood changed. Everything silenced. I began searching the plaques for Syracuse names. Karen Lee Hunt and Alexia Kathryn Tsairis have plaques that read “innocent victim of terrorism” and “They never die, who have the future in them.” Walking through the garden’s visitor center and seeing framed SU press releases and mini Ottos was saddening and comforting all at the same time, much like my entire visit to Lockerbie.

Before arriving in Scotland, I had heard nothing but good things about Scottish hospitality. The Dorrance family proved this stereotype to be true when they opened their home to my parents and me for lunch. I truly watched the world grow smaller as Claire with her parents, and I with mine, connected over cultural differences, English accents and Syracuse basketball. 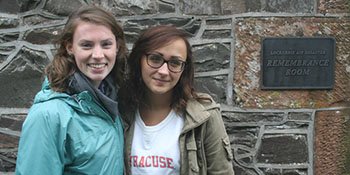 Meeting for the first time, 2012-13 Lockerbie Scholar Claire Dorrance, right, and 2013-14 Remembrance Scholar Emily Pompelia spent the day together in Lockerbie, Scotland this past June. The two pause for a picture together in front of the Remembrance Room on the grounds of Tundergarth Church, directly across from the sheep pasture where the nose cone of Pan Am Flight 103 landed on December 21, 1988.

After lunch, Colin and Claire escorted my parents and me to Tundergarth Church, to see where the nose cone of the plane had landed that December evening and to visit the remembrance room tucked in the church cemetery. As I stood on top of a hill overlooking the town of Lockerbie, a few bends and curves down the road from Tundergarth, I felt smaller than I ever have. Behind me was the iconic spot where the nose cone of Pan Am 103 landed in an open pasture, and in front of me was a town with so much to offer but its reputation already sealed. Perhaps that is what made my day in Lockerbie so meaningful. I was given a glimpse into the life and personality of this humble town and its residents, and saw the beauty of Lockerbie for what it really is beyond the tragedy 25 years ago.

I left with three things that day: a British flag from Claire, much like the one painted into the glass of the town hall; a copy of “Looking for Lockerbie,” a book written by Newhouse professors Lawrence Mason, Jr., and Melissa Chessher, and new-found respect, admiration and humility. This visit defined my experience as a Remembrance Scholar, and taught me what it truly means to act forward.

Emily Pompelia is a 2013-14 Remembrance Scholar and a work-study student in the Office of News Services.