2013-14 Remembrance Scholars to be Honored

The 2013-14 Convocation for Remembrance Scholars, honoring 35 outstanding Syracuse University students from this year’s senior class, will be held Friday, Oct. 11, at 3 p.m. in Hendricks Chapel. 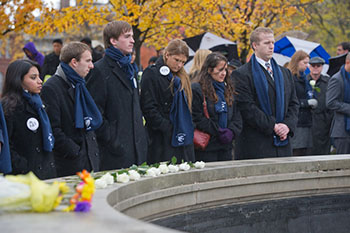 Remembrance Scholars honor the lost students they represent during the 2012 Remembrance ceremony.

The Remembrance Scholarships, among the most prestigious scholarships awarded by the University, were founded as a tribute to the 270 people, including 35 Syracuse University students studying abroad through Syracuse University, who were killed in the Dec. 21, 1988, bombing of Pan Am Flight 103 over Lockerbie, Scotland. This year marks the 25th anniversary of the tragedy.

The scholarships are funded through an endowment supported by gifts from alumni, friends, parents and corporations. Significant support for the Remembrance Scholarships has been provided by C. Jean Thompson ’66 and SU Board of Trustees Chairman Richard L. Thompson G’67 in memory of Jean Taylor Phelan Terry ’43 and John F. Phelan, Jean Thompson’s parents, and the Fred L. Emerson Foundation.

Applicants for the $5,000 scholarship were asked to highlight their academic achievements and University activities, including community service. They also wrote essays and participated in interviews with members of the selection committee.

“What a privilege and honor it has been to serve as chair of the committee that has selected these 35 outstanding scholars. They are indeed SU’s and the world’s best and brightest,” says Mark Glauser, professor and associate dean in the L.C. Smith College of Engineering and Computer Science and chair of the Remembrance Scholar Selection Committee. “Their theme for Remembrance Week, “This is How We Act Forward,’’ is especially gratifying since it embodies taking action … Scholarship in Action.”

Additionally, each year, two students from Lockerbie are selected as Lockerbie Scholars. They spend one year studying at SU on a scholarship before returning to the United Kingdom to complete their university degrees. Both SU and the Lockerbie Trust support this award. This year’s scholars, Callum Johnstone and Caroline Caddell, will be recognized at the convocation.

Glauser will preside over the convocation, and messages will be delivered by Chancellor Nancy Cantor and Edward L. Galvin, director of archives and records management and Pan Am Flight 103/Lockerbie Air Disaster archivist, representing the selection committee. A Remembrance Scholar will speak on behalf of the group, and Glauser will present the scholars.

The 2013-14 Remembrance Scholars, and their hometowns and majors, are: Janessa Bonti of Bronx, a nutrition major in the David B. Falk College of Sport and Human Dynamics; Victoria Charlotte Brewster of New York City, an architecture major in the School of Architecture; Colin Gregory Brown of Annandale, N.J., a broadcast and digital journalism major in the S.I. Newhouse School of Public Communications and a political science major in The College of Arts and Sciences (A&S); Jona Cano of Bronx, a communication sciences and disorders major and neuroscience integrated learning major in A&S; and Erin Genevieve Carhart of Minoa, N.Y., a policy studies major and women’s and gender studies major in A&S.

Also, Alison Margaret Joy of Stratham, N.H., a television, radio and film major in the Newhouse School and an Italian language, literature and culture major in A&S; Amanda Kullman of West Seneca, N.Y., a civil engineering major in the L.C. Smith College of Engineering and Computer Science; Jessica Kimberly Lam of New York City, an inclusive elementary and special education major in the School of Education; Megan Elizabeth LeBlanc of Reading, Mass., a neuroscience and psychology major in A&S; and Garrett A. Lee of Kirkland, Wash., an environmental engineering major in LCS and a mathematics major in A&S.

Also, Carlie Alyssa Thompson of Norwich, N.Y., a psychology and biology major in A&S; Korey William Tillman of Schenectady, N.Y., a computer science major in LCS; Leo Wong of San Gabriel, Calif., an advertising major in the Newhouse School; Zhi Q. Yang of New York City, an information technology major in the iSchool and management/finance major in the Whitman School; and Jamie Yavorsky of Whitehouse Station, N.J., a music education major in VPA and the School of Education.